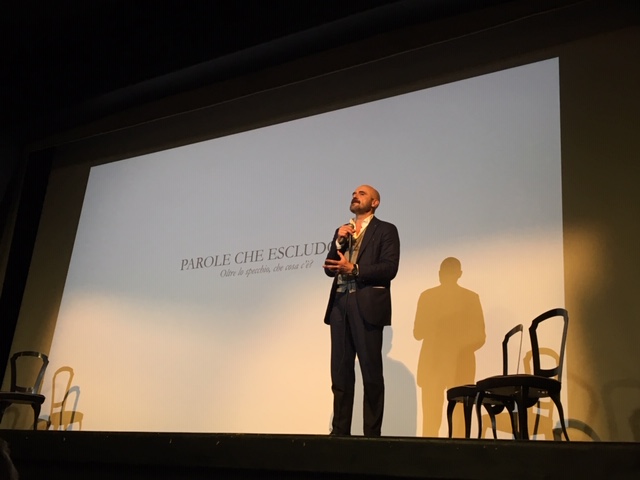 Findomestic - The power of words

When I think of language, the image of Igor Šuran, Executive Director of Parks, immediately resurfaces in my mind, as he stood on the stage of the Alfieri theatre, a small cinema-theatre in Florence that has now become the symbolic starting point of Findomestic's path of Diversity and Inclusion.

The D&I week began: five days in which the BNP Paribas Group annually celebrates diversity in all its forms through meetings, events, articles, posts on social media. For the first time, we introduced Parks to our collaborators: Igor Šuran took the stage, with his magnetic personality, great eloquence and empathy and, alone in front of 150 people, began the monologue he had written: ‘Words that exclude’. Following a path that analyses common words such as ‘tolerate’, ‘accept’, ‘flaunt’ and ‘normal’, Igor invited us to reflect in a way that came at our hearts and minds like a sharp blade. Can a human being be tolerated for the mere fact of having a different orientation from our own? Why does someone who has a different orientation from mine ‘flaunt’ it while I think I don't? Why am I part of a ‘normal’ family? Little by little, I began to wonder about terms I have often used, unknowingly, words in the Italian language, without realising their devastating power: simple words, correct from an etymological and linguistic point of view, but dangerous weapons if used indistinctly and not contextualized. Why can I call my family life normal? Just because I'm heterosexual, have a husband and children? Why don't I have to consider the problem of being accepted or, worse, tolerated? Igor proceeded with the monologue, I observed the faces of those present, enraptured by the words and by the profound reflections they induced: reflections on ourselves, on our atavistic habits, on our education and on our way of being. In the face of Igor's words we were laid bare, with fragility and weaknesses.

History repeats itself. Absorbed faces, enraptured by the speaker's words. At one point a colleague raises her hand and we all think she wants to intervene in the debate. Instead, with disarming simplicity, she says: ‘Can I hug you?’ And having received an affirmative answer, she gets up and throws herself at Igor, deeply moved; other colleagues do the same, united in a great collective embrace. As Igor Šuran explains: we are all victims of our own prejudices; we must not be afraid of them but look for them within ourselves, identify them, recognize them. That is already a big step: do not deny bias and fears towards what is different … The next step will be to approach what seems different and frightening, understand it, know it, observe it from another point of view.  This is precisely where the strength of inclusion lies: in admitting our prejudices and trying to transform them into a great opportunity for personal growth and enrichment. I learned a great lesson from the precious teachings of Igor Šuran: I began to reflect on the power of words, which is a great human capacity, but at the same time a devastating and dangerous force.  As a woman it shouldn't be difficult to understand how words can hurt, diminish, ridicule, annihilate … We have been victims for centuries of a language that discriminates and hurts, a language that is now a part of everyday life to the extent that we no longer pays attention to the ‘jokes’, whether or not they have sexist connotations. During an event organized in collaboration with Artemisia, an anti-violence centre in Florence, a video was shown that was full of sexist comments uttered by women, men, children, the young and old: a rapid and relentless succession of commonly used phrases (‘What are you wearing?’, ‘Stop crying, boys don't cry’, ‘You look like a girl’…), simple constructions – but they are full of cruelty, anger, violence. A violence that affected everyone present, men and women alike.

After these experiences, we decided to have a discussion in the company on the use of language, which involved, first, the Management Committee and which, now, has been extended to three hundred managers. The meeting invited participants to reflect on the power of language and its dangers when it is not used correctly: on the need to pay attention to the words we use, and to reflect on the effects they have on our interlocutors. The consequences can be devastating. Playing with words: in the social media campaigns that accompanied the last two editions of the Diversity & Inclusion Week, we deliberately chose to use provocative language, which refers to common stereotypes and prejudices that are widespread in our daily lives.

Here is the campaign launched in the 2019 D&I Week:

‘Two fathers and a baby do not make a family. Move on.’

‘A woman’s place is in the kitchen. Move on.’

‘Invisible disability is an excuse. Move on.’

‘Am I homosexual? Am I not? Is it really important to know? Or is the commitment, passion and respect I put into my work more important? At Findomestic we don't stop at prejudices, we move beyond them.’ A clear invitation to move beyond appearances, beyond prejudices.

This year we have continued in the same vein, focusing even more on how the choice of words can trigger reactions:

‘We are looking for a Digital Collaboration System Specialist who is male, white, straight, married. Absurd, right? Here, we like to imagine a future in it is truly inconceivable. If you think you have the necessary skills for the role, but do not accept that a recruitment advertisement can overlook the value of being human and different, Findomestic is the right place for you.’

‘We are looking for IT Governance Specialists from the north who are able-bodied, young and from good families. We bet reading this advertisement bothers you. It bothers us, too, because we have always considered differences to be something that, instead of dividing, unites and enriches. ‘

The campaign generated very positive feedback, while also eliciting negative reactions, sometimes strong ones. We have achieved our goal: to invite people to reflect on the power of verbal language. A mission that we will continue to pursue so that language can become a bridge, a link between people, a bond based on mutual respect and the desire to overcome the barriers that sometimes, even unwittingly, divide.