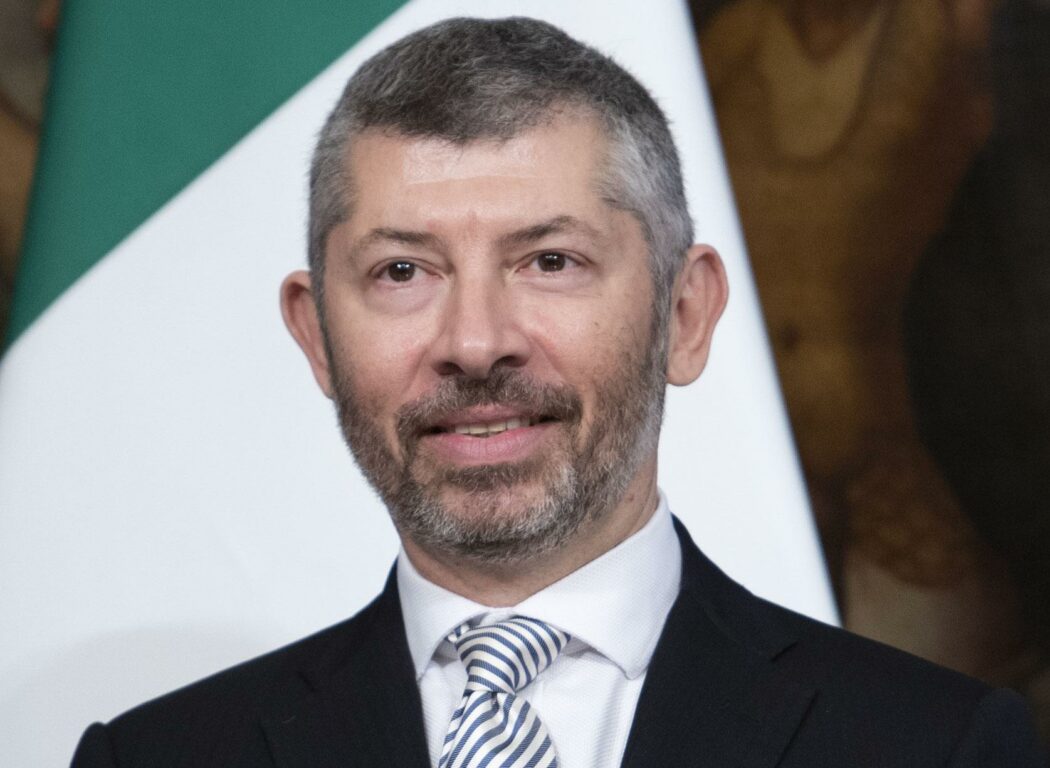 Ivan Scalfarotto, born in 1965, has a warm laugh and a pleasant manner. My nervousness at having the opportunity to interview someone so knowledgeable on this topic and so well known, gradually diminish thanks, above all, to his genuine and welcoming way of talking to me. Ivan Scalfarotto (a Venetian surname, yes, but he is the descendant of a well-travelled family: his grandfather - who fell in the Great War - was born in Alexandria in Egypt, his maternal family is Neapolitan) was born in Pescara, but by the age of three he had already moved to Puglia with his family. He spent all the years of his training there, creating stable links with the territory - to the point that the AGedO chapter in Foggia is now named after his father, Gabriele Scalfarotto.

After graduating with a degree in Law, he worked in major banking institutions and, in 2002, left Italy to move first to London, then to Moscow, as a HR manager at Citibank, of the multinational group Citigroup that is based in New York. Ivan’s Scalfarotto’s civic commitment is long-standing: he is the founder of the Movimento Adottiamo la Costituzione (2001), one of the founders of the Libertà e Giustizia association (2003) and, in 2010, founder of the Parks - Liberi e Uguali association for companies. When, in 2013, he was elected to the Chamber of Deputies he left the executive management of Parks, remaining honorary president, to avoid possible conflicts of interest. Today, in our parliament, out of 945 MPs only three men are openly homosexual and one of the central themes of the "battles" of the Hon. Scalfarotto is certainly that for the rights of the LGBT+ community, and it is precisely this topic that we will focus on today. In 2015 and 2016 Ivan Scalfarotto was the only Italian to appear in the Economist's Global Diversity List of the top fifty diversity figures in public life, a list of the fifty people who have contributed the most, in their public function, to progress and to the recognition of diversity rights.

V: In this regard, in 2010, in a book published by Piemme, you listed ten crucial issues on which it was necessary to intervene immediately. Eleven years later, I would like to try to take stock with you.

Extending to all citizens the opportunity to get married

I: Technically, the answer is "no": we do not have marriage that is the same for all yet. However, civil unions were established in 2016, and this is certainly a huge step forward because for the first time, homosexual couples have been recognised as families in all regards, subjects with mutual rights and duties towards each other and the community. The shameful situations from before can no longer occur, when life-long partners were not allowed to visit each other in hospital, or were excluded from inheritance or from family units. But there is still some way to go towards equal marriage and full equality, even formal equality, between heterosexual and homosexual married couples.

Legal recognition of the prerogatives of cohabiting couples

I: Law 76/2016 also covers straight and gay cohabiting couples, thus creating a regime that provides for the possibility of an official union (marriage for straight couples and civil union for gay couples) or the discipline of cohabitation (and in this case the discipline is identical for the two situations). We hope to overcome these differences and that one day, finally, we will be able to have full equality for all couples, whatever form of union they choose.

Approving a law that recognises the parental rights of gay couples

I: No, it hasn't been approved yet and it's a huge shortcoming. In the courts, the cases of families asking for protection from judges are multiplying. In short, the approach continues to be to address the issue through individual rulings, which, however, provide only episodic and erratic coverage. The saddest thing is that by insisting on not granting a right to (or rather, not recognising the duties of) adults, we make children pay the price for this discrimination. The burden is placed on boys and girls who already exist, who are among us, who are not "at fault" and, with the excuse of protecting the abstract need to "have a mother and a father", we deny the concrete right to existing children to see their families recognised and the two figures they recognise as parents protected by law.

Extending the Mancino law to homophobia and transphobia

I: This makes me so angry: we could have had this law seven years ago. And instead, to date, what we have had are seven more years of violence, assaults, beatings, exclusion and mockery in the absence of a law. Now the proposed "Zan" law (editor’s note: the object of which is to implement measures to prevent and combat discrimination and violence based on sex, gender, sexual orientation, gender identity and disability.) has been blocked in the Senate, which is the real stumbling block for every law. The mistake, the misunderstanding many fall into, is the idea that this law could limit citizens’ freedom of opinion. Yet freedom of opinion was certainly not undermined when, in 1993, the addition of racial, ethnic and religious aggravating factors to acts of discrimination and violence was decreed, was it? The criminal law is the extrema ratio of behaviour – which is in fact extreme, if it needs to be crushed. What really matters is the educational, pedagogical message that such a law can communicate: that our national community repudiates all forms of hatred and discrimination, including those against people with disabilities and against women. (Editor’s note: Italy, according to the "Trans Murder Monitoring" index of Transrespect versus Transphobia Worldwide, has the highest number of victims of transphobia in Europe).

I: Here, too, there is still a long way to go. It's never too early to talk about inclusion and diversity. I begin with the assumption that an educational message based on inclusion can be understood at any age and, together with learners, it would be essential to train educators, teachers, managers, and all support staff who interact with boys and girls daily. The bill under consideration by Parliament includes very interesting rules, such as the formalisation of 17 May as World Day against Homophobia and Transphobia and education about diversity for students.

I: First: the right to change sex is part of the inviolable rights of the person and in this regard Italy has for once been at the vanguard: in fact, for thirty years in Italy we have had a law that allows transsexual people to legally change their registered gender. Only since 2015, however, and again thanks to decisions made not in parliament but by the judiciary, has it no longer been necessary for the request for a change of sex on the register to be accompanied by a physical transformation (i.e. surgical intervention, which demolishes - totally or partially - primary anatomical sexual characteristics); it is no longer a mandatory prerequisite for rectifying one's name and gender on identity cards, but remains a possible further functional means for achieving full psychophysical well-being.

Developing a culture that opposes discrimination in the workplace

I: In this specific area, the work done by "Parks - Liberi e Uguali", the association of companies that I founded and which deals with offering equal opportunities and inclusion to LGBT+ people in the workplace, continues to be extremely important. Over seventy member companies have committed to including and protecting the rights of LGBT+ people in the workplace. Beyond Parks' role, the world of organisations is clearly moving, finally, to maximise the potential of their people.

I: This objective was also a huge step towards achieving equal gender representation and an equitable distribution of decision-making power within the largest public, investee and listed companies, and was achieved through law 120/2011, better known as the "Golfo-Mosca" law, named after the two deputies - Lella Golfo (PdL) and Alessia Mosca (PD) - who promoted it. The law has recently been renewed (editor’s note: because it was classified as affirmative action and as such had an expiry date). And it is, without a doubt, accelerating and supporting an indispensable cultural and organisational change that, if left to take its natural course, would have taken over a hundred years to come into being.

Reserving a period of exclusive paternity leave for fathers

I: As regards this goal (editor’s note: if we read carefully between the lines, this is more of a means to achieving a much greater goal, rather than being an end in itself), there is still a long way to go, since - despite some legislative improvements and the fact that many large companies have increased leave for new fathers, thanks to particularly innovative and inclusive internal policies - the country (in organisations, SMEs and many families) has not yet achieved the real and profound changes we need. It is now imperative that both care work and professional careers have equal weight and importance in the lives of men and women. In this regard, I would like to make a proposal: the current five-month compulsory leave, which is reserved only for mothers, should in my opinion be divided into two equal parts that should be used by both parents: two-and-a-half months each.

I: This is a sore point because it necessarily requires – perhaps more than any other point discussed here – that we make space for others, and not everyone is willing to do so. The state is secular because our society is plural, and everyone must feel at home in the Republic: all those who have a faith, whatever it may be, and all those who do not. You can be faithful to a religion, but those who govern must always remember that they do so for everyone; they swear on the Constitution, not on one of the sacred books. Today, more than ever, it is essential to distinguish between religious morality and law, if we want to proceed and improve rather than move backwards.