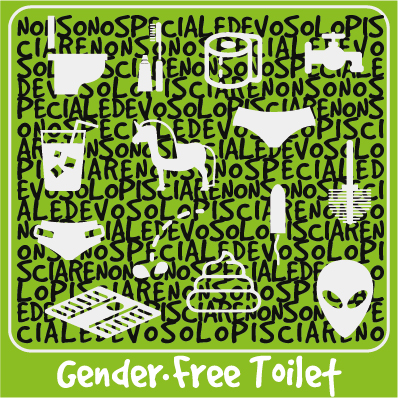 Occupy the bathroom: it’s gender-free! - A trans-feminist reflection on bathrooms, cis-heteronormativity and trans-subjectivity

We are a group of trans-feminist queer, trans and cis-gender people, who experiences spaces through their individual bodies and positions, and who daily traverse environments, finding themselves in conflict with the rules that regulate structure and reading, which dictate the lawfulness or otherwise of existences and behaviours. We constantly feel the discomfort that marginality forces on us. And it is precisely out of the need to act on our discomfort in a transformative sense that the reflections and practices that move the Gender-free toilet project arise.

Our experience begins where the cis-heteronormative system that governs our lives exhibits its most complete, most defined, most binding results: public restrooms. Along the path dictated by the naturalness of a gesture that responds to a physiological need, we frequently encounter two doors that display a stylised figure wearing a skirt and a similar one wearing trousers. The boundaries of being and acting legitimately in our socio-cultural horizon are marked by those few traits that inevitably indicate two genders, male and female, and two ways of expressing them, with their corollary of gestures, aesthetics and clothing, taking them for granted. It is in the face of that "taking for granted", of the power it expresses, of the oppression that acts on those who hesitate in front of those doors, on those who, faced with that binary choice, do not recognise their own space of existence and expression, that we have tried to build ease, starting from the deconstruction of that obviousness that does not take us into consideration.

First, because that space and those representations exclude non-cis-gender people, those who do not identify with the sex assigned at birth. These are trans people, for whom this inconsistency is linked to a strong self-identification with the gender considered their opposite, or whose gender identity does not correspond to either of the male-female poles, as in the case of non-binary people. Therefore, it is not the "obvious" choice to open one door rather than another.

The Gender-free toilet project was therefore born with the aim of making this multiplicity of genders visible and releasing the rigidity of expressions; it is an invitation to replace – in every space that is open to the public – restrooms divided by gender, with gender-free restrooms, that is, restrooms that can be accessed and used by everyone, by all possible subjectivities, non-binary, trans and cis-gender.

In practice we imagine proposing a new symbolism that would offer everyone the opportunity to recognise themselves and to enjoy an essential service with ease. We propose that non-binary, non-dichotomous images be placed on one or more doors, to convert all restrooms that indicate a division by gender into gender-free ones. We have also added some informative materials that favour discussion and visibility of identities relegated to minority positions and marginality: it is a poster to be affixed on the restroom doors and a brochure in which to offer answers, share questions and allow yourself more time for collective reflection.

And based on this we wanted to start to create the graphic representations to be used. To counter a system and practices that daily overdetermine subjectivities, preventing them from self-defining and self-representing, we have chosen to ask an enlarged circle of trans, queer and non-binary friends and activists what image they would like to be represented by and to see on a restroom door. And it is based on their responses and the need they raised to shift attention from their bodies to the type of service provided by restrooms that we were inspired. Not mermaids, newts, octopuses or aliens, but objects commonly found in public restrooms: toilets, urinals, sinks, changing tables, sanitary towels, bins...

These are reflections and concrete actions, which find support and dialogue with what research in the academic field, in particular in the field of queer and gender studies, and activism, albeit with different implications, objectives and opportunities for self-reflection, highlight and subject to criticism.

Bathrooms communicate, confirm and reaffirm to the public the values ​​of the social system they emanate from, supporting a binary and cis-heteronormative gender order (Connell, 2006) inserted into a system of power, control and discipline (Bender-Baird, 2016 ) of bodies, expressions and possibilities or not, of self-determination, even in choosing where to pee. The binary genderisation of the public space, as well as of the world-system, thus defines the figure and measure of exclusion, since it establishes who is in the right place and who, instead, is not (Borghi, 2020).

The non-innocence of this symbolic system also exposes people who do not fit into this dichotomy to stress, discomfort, inconvenience and potential violence (Herman, 2013; Meyer, 2003); their non-adherence to hegemonic models, of male or female, in fact, can arouse in cis-gender people feelings of rejection, disgust, mockery and aggression.

Despite the apparently limited scope of action, in its interrogation and attack on symbolic and material architectures, the Gender-free toilet project aims to support an action of progressive and capillary transformation of the space, of its cis-heteronormal and -normative representations and implications; helping to broaden the horizon of ease and visibility for all those subjectivities that are not found in the rigid stereotyped binarism of genders and also creating opportunities for reflection on the repercussions that normativity also has for cis people. And who knows, the next time we see each other in a bathroom we might be more attentive and sensitive, not sanctioners, finally free to pee in peace.