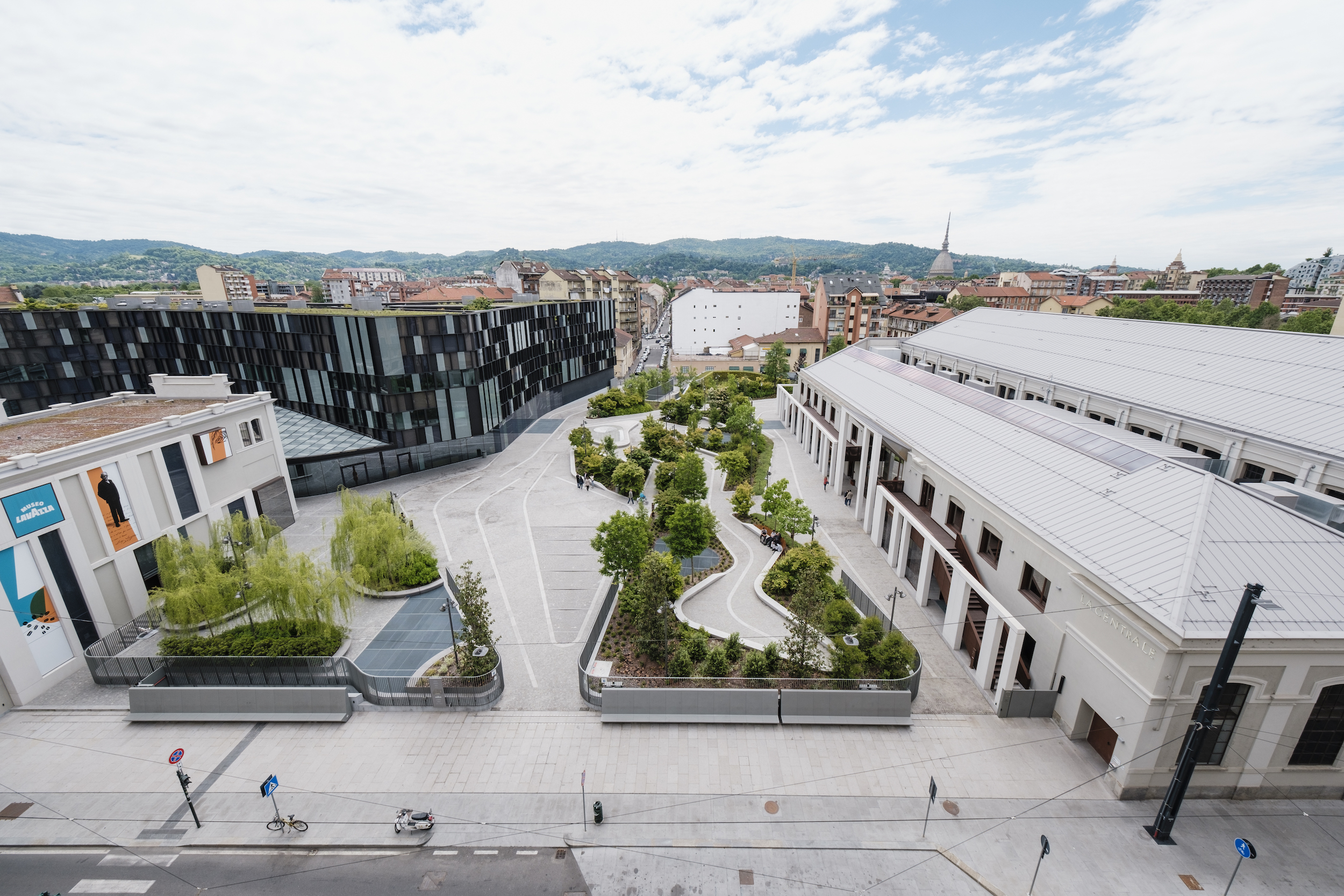 Group headquarters and open space for the city and the community

By the editorial team

Bright, modern, open. It is difficult not to be left awed by the large atrium of Nuvola Lavazza, the Lavazza Group headquarters in Turin's Aurora district. It is not just the architecture that is striking. It is the underlying concept that makes you reﬂect: the atrium is not simply the entrance to 'casa Lavazza', but the bridge that unites a historic company with the city and the people who live here.

Every inch of these spaces talks about a new present that is already the future. The Nuvola manages to contain over 125 years of history, in which Lavazza’s relationship with Turin has been fundamental and continues to be so.

Inaugurated in 2018 and designed by architect Cino Zucchi, Nuvola is the headquarters of the Lavazza Group's offices, which houses around a thousand people who work here every day, and at the same time a meeting place, an inclusive space for meeting, experimenting, and growing together.

Nuvola Lavazza was designed to be not only an avant-garde business centre that is certified LEED PLATINUM (developed by the U.S. Green Building Council, LEED PLATINUM is a voluntary system for certifying a building with regard to its entire life cycle, assessing its sustainability in a comprehensive manner, ed), but above all a space that is open to the public.

Nuvola is the Lavazza Group's headquarters and at the same time a meeting place, an inclusive space for meeting, experimenting, growing together

The Piazza Verde (Green Square) is the green lung of Nuvola Lavazza, where you can stroll and rest on the white granite benches. The central fountain makes stopping here even more pleasant on summer days.

The Piazza Verde is overlooked by the Bistrot, a Km 0 collective dining space (a place that serves food that has not travelled far, ed.) for employees developed in collaboration with Slow Food, also open to the public, and 'Condividere', a Michelin-starred restaurant inspired by the informal sharing of signature dishes and developed in collaboration with the famous Catalan chef Ferran Adrià.

On the other side of the square, you find another piece of Lavazza history, designed for all visitors: the Lavazza Museum, designed by Ralph Appelbaum (who, among others, has also worked on the United States Holocaust Memorial Museum, the Hall of Biodiversity at the New York City Natural History Museum, the London Transport Museum and the Walmart Museum, ed.) A space that allows visitors to embark on a sensory-emotional journey into global coffee culture, interweaving that story with the history of the Lavazza family and, through it, with Italian industrial history of the twentieth century. An interactive coffee cup, a rich installation and evocative texts written by the Holden School under the supervision of Alessandro Baricco, accompany visitors and allow for a personalised and enjoyable experience.

The museum is organised into five 'galleries': Casa Lavazza focuses on the history of the company and the Lavazza family, La Fabbrica focuses on the production of coffee, while La Piazza celebrates the ritual. Atelier explains the company's creative collaborations and Universo invites visitors to find their own place in the Lavazza experience.

The redevelopment project of the disused area where the Nuvola now stands, which occupies a total of 30,000 square metres, also involved the former power station in the Aurora district. The name has remained, but today the Power Station is a large, ﬂexible environment that can host events, concerts and temporary exhibitions.

Nuvola Lavazza is the future built on the solid foundations of the past, metaphorically and literally. In 2014, excavation work between Corso Palermo and Via Ancona brought to light the remains of an ancient early Christian basilica dating back to the second half of the 4th-5th centuries A.D., an archaeological area that covers approximately 1,600 square metres, which can be visited by appointment.

Yesterday, today and tomorrow: this is Nuvola, the embodiment of an organisation aware of its role in the city.