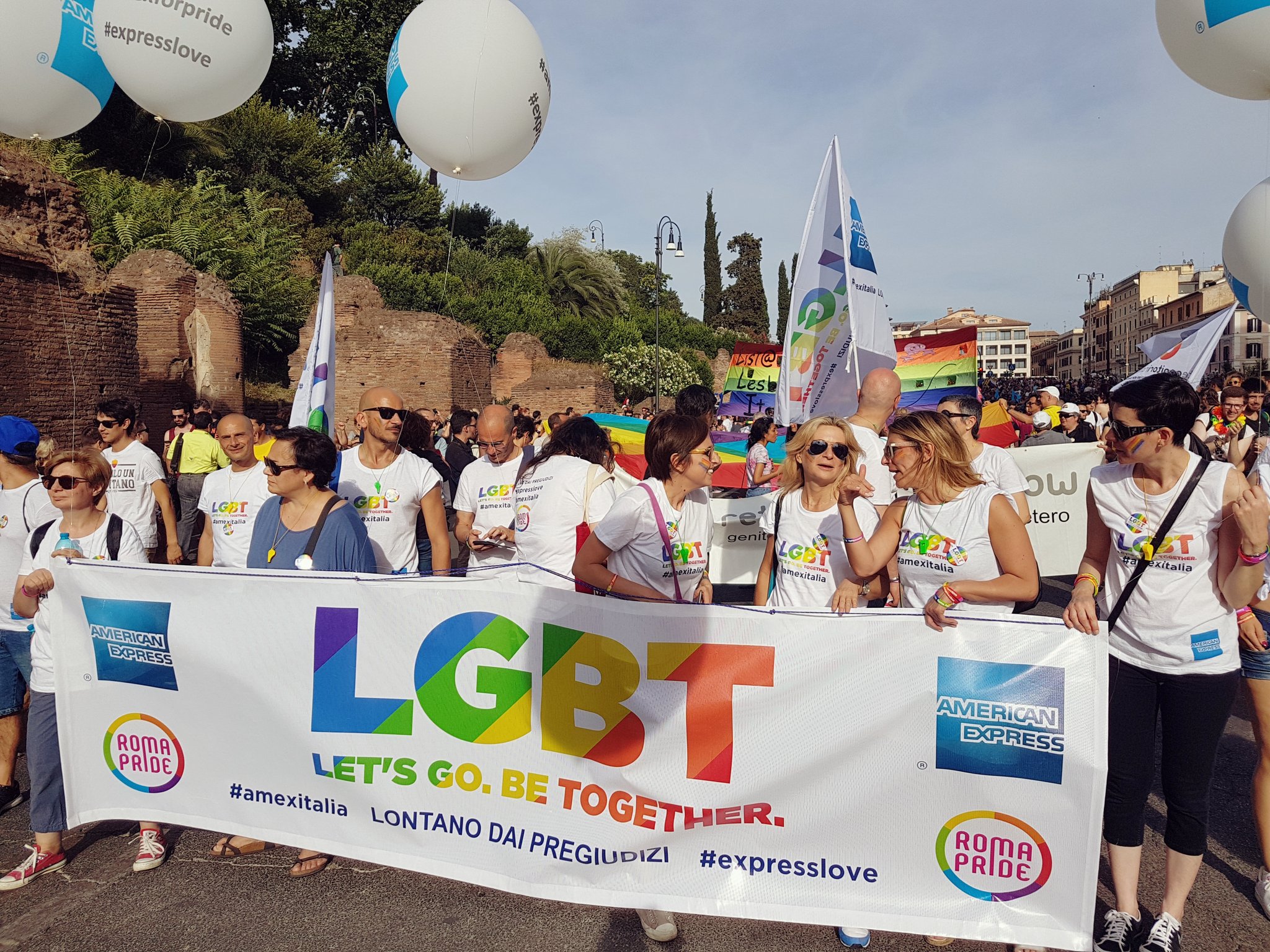 Let's go be together

Our goal is to ensure that this is a place where all colleagues are engaged, have a voice and can thrive. Because here at AMEX, being yourself matters. This sentence sums up the importance of inclusion and diversity at American Express. Our company has always demonstrated a concrete commitment to creating a highly inclusive work environment based on the richness of diversity. We promote and encourage diversity and inclusion, actively engaging in guaranteeing all colleagues the opportunity to express themselves freely.

Since the beginning of its long history, American Express has been a strongly inclusive company free from prejudice: already at the beginning of the 20th century, the first woman joined its workforce, and shortly afterwards the first company network was born, made up of colleagues united by common interests. In the 1940s, the percentage of working women grew to 40%, in all positions, up to the first female Senior Leader on the Board of Directors in 1970, and the appointment of the first female Vice President. In the years that followed, the focus on diversity and inclusion continued to grow, actively involving all colleagues through programmes and information sessions; a culture of diversity was strengthened which, already at the beginning of the ‘90s, led to company benefits being extended to cohabiting couples, including same sex couples. Today we boast over 170 female and LGBT Senior Leaders, and our Inclusion & Diversity culture encompasses even broader themes, ranging from the launch of new networks to new training initiatives based on the importance of inclusion. Recently the strategy has been further renewed, further emphasising the concept of inclusion – the sense of belonging to the company, to a work group, to a network – as well as how diversity is valued in the company, understood as wealth and the diversification of opinions, skills and experiences. These issues are important for our colleagues, but also externally for our customer base, and are certainly critical to the success of the company. We can count on a strong global culture that communicates transversally with everyone, in a straightforward and direct way. Our CEO Steve Squeri recently stated: "American Express has a long-standing commitment to fostering an inclusive and welcoming workplace that reflects the diversity of the customers and communities we serve."

2020 was a particularly important year for Inclusion & Diversity at American Express, with the launch of numerous initiatives in support of the global and local strategy, including the introduction of two new values ​​in our corporate 'Blue Box Values', specifically dedicated to inclusion and diversity: We Embrace Diversity and We stand for Inclusion. In addition, various ad hoc initiatives were implemented, such as sessions for people leaders, the introduction of a mandatory course on I&D for all colleagues and numerous workshops. In October, the Office of Enterprise Inclusion, Diversity and Business Engagement was established to further enhance our strategy, with a holistic four-year plan that aims to expand existing initiatives and create new opportunities to spread and root this inclusive culture in all six pillars of our business: Brand, Culture, Colleagues, Customers, Business Practices and Communities. Finally, our corporate scorecard, which measures performance against business priorities, includes a variety of diversity-based metrics, including gender diversity. For example, between 2018 and 2020, significant improvements were achieved regarding female representation in the company's management (+ 250% in the Executive Committee, + 100% in the General Management in various markets, + 33% on the global Board of Directors). In short, attention to people has always been at the centre of our strategy and continues to be a key factor for our success and business growth. We firmly believe that gender diversity is a competitive advantage for the company. Our mission is to integrate and promote highly inclusive leadership and at the same time create global practices of inclusion and diversity through global and local initiatives, networks, and the sharing of best practices. Our selection policy starts with the principle of diversity and our leaders are aware of the importance of having a team that is as inclusive as possible.

We encourage each person to maximise their potential by supporting their path in the company with specific programmes and training. We listen to each colleague and over time have implemented various initiatives to meet our employees’ expressed needs (e.g. Smart working, Corporate sustainability, Wellness and health programmes). Finally, we are at the forefront with policies to prevent bullying/abuse in the workplace, topics that are covered in our Code of Conduct. All this has allowed Amex Italia onto the podium of the Great Place to Work Italia awards for four years, and this year to conquer the 1st place. Furthermore, the Diversity Brand Summit has included us among the most inclusive companies in Italy thanks to our culture of diversity and the implementation of concrete initiatives. An integral part of the I&D strategy are also the corporate networks on various topics of specific interest, managed directly by colleagues and sponsored by the company's Executive Senior Leaders, whose establishment has always been encouraged by the company. Globally, we have 16 Networks, developed in over 100 local 'chapters' around the world, and all of them are essential in supporting the growth of a culture of diversity in the company. About 40% of our colleagues are part of a network, which include, for example, the Black Engagement Network, Disability Awareness Network, Gay, Lesbian Networks, Hispanic Origin & Latin-American Network and the Millennial Network. Among these, the network dedicated to women, WIN - Women's Interest Network, is very important. With senior leaders of the company at the forefront, committed to spreading a culture that is open to women, with campaigns, leadership sessions, workshops and mentorship at all levels, and the Pride Network, which promotes the dissemination of issues related to the LGBTQ + world. American Express has officially supported the inclusion of LGBTQ + people since 1987 and in recent years has boosted the promotion of Pride through numerous initiatives around the world. There is also a Pride Network in Italy, where it celebrated its fourth birthday last November. The network has about 250 colleagues from all business lines and at all levels, including Executives and Vice Presidents as sponsors of the project, and is active in the market with an annual programme aimed at increasing awareness of Pride issues through the work of a Pride Committee, made up of about ten colleagues who volunteer, from various parts of the company, and they are responsible for proposing, launching and implementing market initiatives. The launch of the network was accompanied by a dedicated 'Manifesto', and the LGBT acronym was creatively transformed to express the spirit of the programme: "Let's Go Be Together!" The annual activities of the network, shared through a dedicated email address (Pride Italia) and a dedicated company intranet page, include:

The creation of informative events called Pride Breakfast Club, for the Pride Network. Held in person over the past few years, these sessions have involved outside guests who are of great importance for the Pride world, such as Senator Monica Cirinnà, who explored aspects related to legislation, and Luca Trapanese, who shared his touching experience as the first gay adoptive father of a girl with Down syndrome. This year the Pride Breakfast Club took place in virtually, but was no less interesting, with our guest Claudio Rossi Marcelli, a writer and journalist and father of three with his partner. His story led us to discover the importance of valuing families (and not only 'traditional' ones) and the courage to form a family unit despite all the difficulties created by backward mentalities and bureaucracy, which often slow down integration. Information sessions with ANLAIDS Lazio, an association that deals with creating a culture of awareness regarding the issue of HIV/AIDS, especially among young people and in schools. The celebration of Pride Month and participation in the Pride Parade in Rome. This was a great event, held in person in recent years, with an American Express wagon sponsored by the company. In 2020, the parade was transformed into an online initiative that involved all members of the network: a virtual parade, with photos or selfies of colleagues that were published on the company intranet. Corporate volunteer events on the Pride theme, where colleagues dedicate their working day (paid normally by the company) to charitable activities for selected associations. Again with the aim of enhancing and spreading the culture of inclusiveness and diversity, last year the Social theme was also explored, inserting the Inclusion & Diversity strategy into the company’s Employer Branding Plan, which saw the creation a campaign dedicated to I&D with posts on LinkedIn and insights into the presence of women and LGBT employees.

The success of American Express in its long history has been based above all on knowing how to overcome challenges through flexibility and innovation, transforming difficulties into opportunities. The current pandemic has allowed us to evolve and renew our strategies much more quickly, acting as an exceptional accelerator - a valuable opportunity, in which we will certainly continue to invest even once this historic moment has passed. The value of diversity constitutes a fundamental element of our strategy like never before, starting with the selection of talent in customer service, relying on highly inclusive personnel management and above all on a shared culture that is increasingly open to respecting and enhancing all kinds of differences.