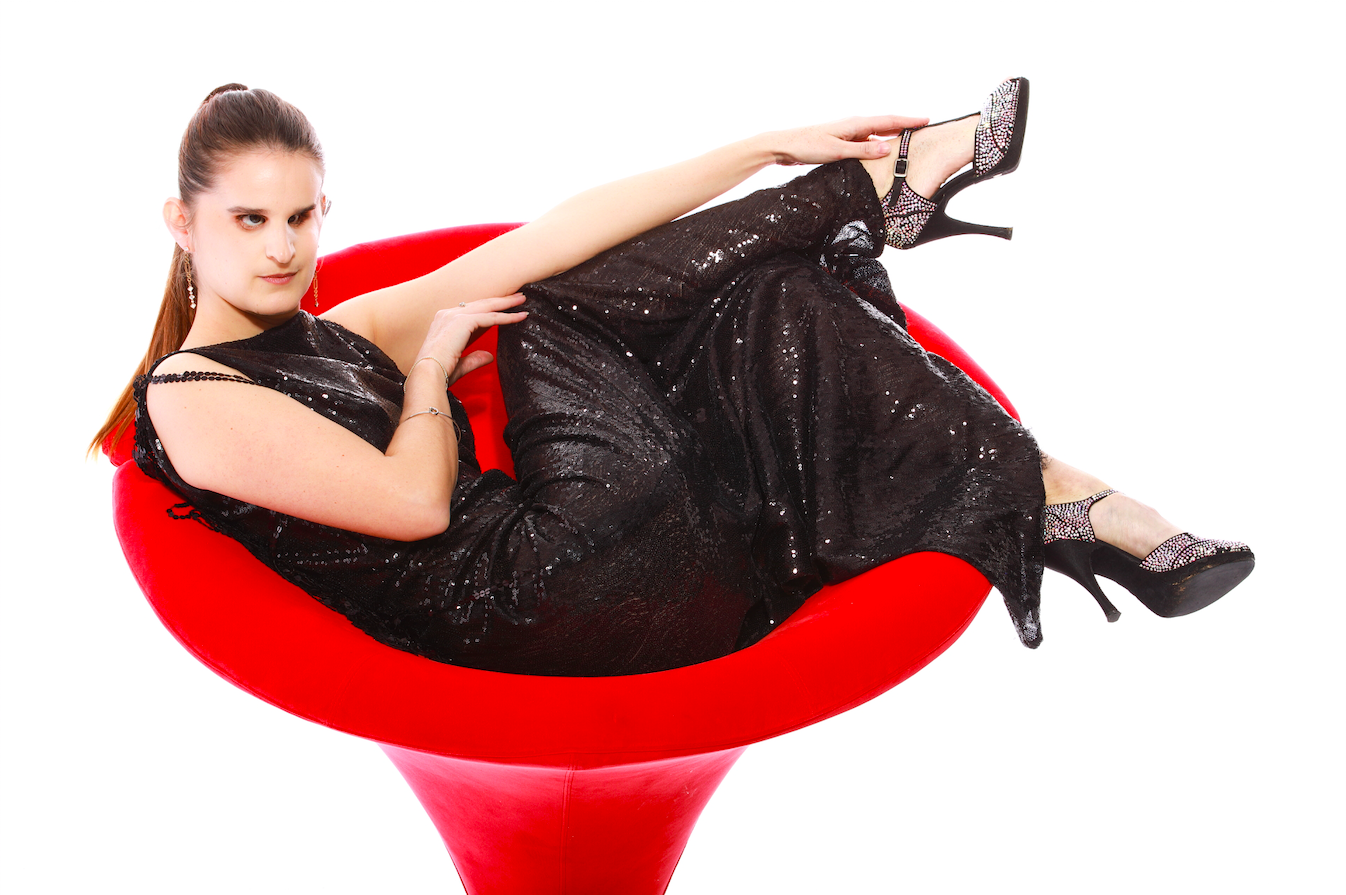 Elena Travaini was born in Sondrio in 1986. She immediately had to face the challenge of dealing with a rare retinal tumour that forced her to spend the first three years of her life in a specialised centre where she underwent several operations and multiple cycles of radiotherapy, chemotherapy and laser therapy. In her right eye, her eyesight was reduced to a tenth of what it would otherwise have been and she experienced complete vision loss in her left eye, but it is the serious eye deformity caused by radiotherapy that has shaped her life the most. At the age of five she took up dancing and over time realised how valuable it was to her: during her adolescence it was by focusing on her artistic talent that she was able to withstand criticism, bullying, and the curious but often nasty looks from peers and, even worse, adults. And it was through dance that she met Anthony Carollo, her husband and partner of over nine years. Together, they graduated as Couple Dance Masters and have taken part in various competitions. But during training sessions Elena fell into deep despair: she was unable to perform certain parts of the competition choreographies; things that seemed easy to others felt impossible to her and so dance, which until then had been her lifeline, turned into tears and disappointment. Great disappointments are said to give rise to great dreams and incredible achievements. Anthony tried to dance blindfolded to be a part of Elena's world and the couple realised that dancing in the dark helped them to perform steps and choreographies that had seemed impossible: they changed their way of experiencing, of communicating, their conception of space and time. Their experiment was called Blindly Dancing and turned into a project for experiencing the dark through dance, play, sensory pathways and Elena's testimony, which in three years has involved over 250,000 people all over the world. Elena realised that by talking about herself she could change the world!

After she posted a photo and video on Facebook, Elena received one award after another: the TOYP (Ten Outstanding Young People) award for personal growth and the International Dance Award for her commitment to social issues; she also won the national competition Ballando on The Road. Together with Anthony she participated in the Rai 1 television programme Ballando Con le Stelle, and proposed dancing in the dark as a special test.  The couple has also taken part in other programmes, including the Bolzano Passion Ice Gala, La Vita in Diretta and Le Iene. Many national newspapers have written about her, she has been interviewed by magazines such as Vanity Fair, Chi, Silhouette Donna and has spoken of her path to acceptance in a video interview with the online magazine FREEDA, entitled ‘Beauty beyond stereotypes’. The latter also enabled her to star in the short film Blindly Dancing directed by Fabio Palmieri which was nominated for numerous international film festivals.  Another of Elena’s dreams came true when she took dancing in the dark overseas: in August 2018 she presented the experiment at a New York Business School. On that occasion, director Nils Wanberg suggested that the couple do a documentary on their story, setting it in the most beautiful locations in the Big Apple: thus Blindly Dancing in New York was born.

But Elena didn’t stop there: she presented her talk during TedX Varese; took the stage at Just the Woman I am in Piazza San Carlo in Turin in front of 56,000 people; and she collaborates with companies and schools. She also participated as a model in the "Donne Fuori dall'Ombra" project by photographer Cristian Palmieri and posed for Ilaria Facci for the "Retinoblastoma" exhibition, which opened in Florence in December 2019. Remembering her experience in hospital, she created the project "Dona Un Colore a Un Bambino" (Donate a Colour to a Child), a fundraiser for the purchase of artistic, recreational and educational material to be donated to paediatric oncology and child neuropsychiatry wards.

Elena is a mother, wife, entrepreneur and career woman, but is always different from others. In addition to her achievements, she also wants to be a stylish woman, with the support of those who believe that fashion and luxury can also include people who are physically different.  In March 2020, with the onset of the pandemic and the ever-increasing use of social media, the pursuit of an increasingly artificial image became more and more extreme, which is why Elena decided to continue to dedicate herself to inclusive fashion: with the help of make-up artist Silvia Gozzi she created a project titled "Modern Greek Goddess", and played the roles of 12 goddesses in a series of photographs, with the aim of provoking and bringing a message of self-acceptance and freedom to feel at ease in one's own body to the world of fashion and society in general. Another important project was "Imperfection is beauty", in which the photographer Beatrice Brambilla wanted to showcase Elena's uniqueness and beauty by exalting her differences and making her a symbol of victory and strength. This project brought Elena great success and another goal: the publication of the shots in the important Canadian photography magazine MOBJournal.

At the beginning of 2021, thanks to a meeting with Daniela Simoni – a model and creator – and photographer Marco Federici of Progetto Runaway, Elena was chosen to open the five fashion shows created for a closed-door event for the design brand Maripel Moda.  In April 2021, Elena, together with designer Loredana Corallo, created a rose bronze bracelet with a Braille engraving. “This is me”, Elena's chosen phrase, evokes her strength and the goal of creating a piece of jewellery that is glamorous, accessible and inclusive.