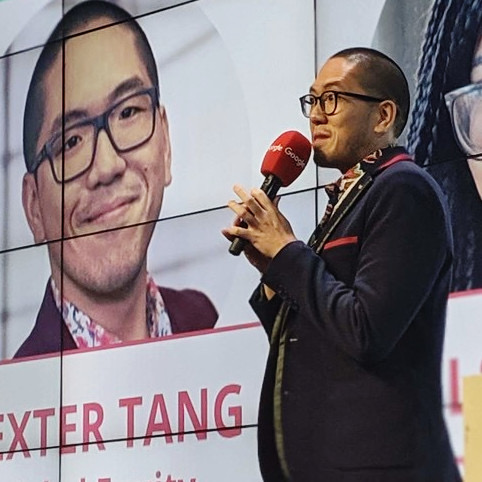 I was born in Malaysia - a fairly conservative Muslim majority country. However, Malaysia is culturally diverse and my family has a Chinese heritage. I grew up pretty much in what you could refer to as a “typical Asian” household. Reflecting back, when I was younger, I was an extrovert but at the same time I don’t have much confidence in speaking up. This is not surprising given our culture. We were encouraged to listen more than we were asked to speak up. In the Asian culture, obedience is like a form of respect and challenging authority is no no. Nevertheless, growing up I felt like I was different. I was brought up in an Asian culture but at the same time with a lot of western influences. Therefore, even though I was “shy” and afraid to speak up in general, I remember how much I knew I was able to get out of my comfort zone if I wanted to. All I needed to do was to break out of it and at the same time, being provided with an environment that allowed me to do so. Growing up, I wasn’t very adventurous either. If you’ve asked me if I were to be living in Europe in my 30s, I would have said not in a million years! I have a bubbly personality, yet I was quite sheltered. I was quite comfortable with where I was (although not necessarily happy!). Separately, growing up in an Asian community with little acceptance and understanding of the LGBTQ+ community, I often wonder if there was something wrong with me because of the fact that I’m actually gay. I struggled to accept who I was growing up and had issues with accepting myself during the later parts of my life as well (until my late 20s in fact). Growing up, the word “gay” was such a taboo in our community and often viewed as “strange” or something to be frowned upon.

I grew up mostly in Malaysia and went to school in Malaysia. I was in an all-boys school the entire time (from primary school to high school).  My lack of self-confidence was also due to the fact that I was bullied in high school for being a bit more “effeminate” compared to other boys in my class. I was never the “cool kid” in school and the bullying did impact my self-confidence in a way and ultimately contributed to a lot of my insecurities in my teenage years (and also in my 20s!). In a way, I was ashamed of my sexuality and often tried to “fix” it. My first overseas experience was when I moved to Melbourne, Australia for 1 year for a university exchange program between 2008 and 2009. That was my first taste of life outside of Malaysia. My move to Australia in 2008 helped me to be a part of a community that is more open than what I’ve experienced back in Malaysia. Although I wasn’t confident enough to “come out” at that time (in Australia), it did give me a feeling of acceptance - that it is okay to be gay because I’ve met more openly gay students in Australia and the Australian university I was in had a “Queer Lounge” which was something new to me! The turning point in my life was that year in Australia in a lot of ways. I remembered that it was so hard for me to say goodbye to Australia when I finished the program. From that time onwards, I knew I had to go back and so I did - I migrated to Australia in 2015 and lived in Sydney for about 4 years before my move to Dublin in Ireland.

After finishing my studies and returning to Malaysia from Australia, I started my career in PwC Malaysia as a Tax Associate. From a cultural background perspective, I didn’t put too much thought into it because I was surrounded by mostly Malaysian people at work. However, I was technically still not “out” and continue to avoid talking about the fact that I’m gay at work - again because of the environment I was in. While I was not in a hostile environment, the work culture in Malaysia did not provide an environment for me to be comfortable enough to be “out”. To reflect back, I didn’t think it would have been an issue if my colleagues found that I was gay but the point I’m trying to make is that the environment did not provide me with that psychological safety of coming out or being transparent about my sexuality and this was exactly how I expected it to be when I first started my career there.

I think diversity and inclusion used to be focused on what we are doing but one big change I can see is how people are looking at more than what we are doing and focusing more on what impact we are making through our initiatives. In other words, through all the initiatives, have you transformed the lives of people around you? What difference have you made? Diversity and inclusion became more than just checkboxes to tick and the society is increasingly holding all of us accountable. Organisations can no longer just say “we are doing this or that to promote diversity and foster inclusion”. The society wants to see the change the organisations are making and lives they have impacted. As we can see, more and more organisations are being prohibited from participating in Pride festivals due to the increasing perception of “pinkwashing”. Another aspect of how diversity and inclusion has changed over the last 5 years is how it is no longer just a “good thing to have” or something extra. It is more commonly viewed today as “given” and considered essential. In addition, over the years we can see that diversity and inclusion encompasses more than just women, cultural, LGBTQ+ etc. For example, neurodiversity is increasingly being discussed more than 5 years ago.

Diversity to me is simply being you, the appreciation for individual differences in all forms (mindset, culture, background etc.) and recognising / acknowledging the value that it brings.

I know I can’t change the world but to me, I’m doing my part by constantly being in the conversation on diversity and inclusion. Being an Asian man belonging to the LGBTQ+ community, I’ve had my share of struggles and challenges. I want to use them to inspire, to play my part and to pay it forward in hope that other people like me will not have to go through what I went through or at least they have hope and able to see the light at the end of the tunnel. Look, I’m not saying that I’ve been through the worst. In some ways, I acknowledged that I am in a privileged position and I know for a fact that there are others who went through more discrimination and probably tougher challenges than me but I always remind myself that it isn’t a competition. All I can do is play my part based on my own experiences and continue to share my stories to create an awareness and hopefully we don’t even have to talk about diversity and inclusion anymore in the future. At least that’s the ideal.

In simple words - it is just the right thing to do! Society is keeping organisations more accountable than ever before. Besides, if you want to create a product or deliver a service, without diversity, you will be losing out because it is highly unlikely that your product or service will be inclusive for everyone. I have to say that I am proud to be working at Google because we believe that our products and services should be built for everyone. In fact, Google’s mission has always been to “organise the world's information and make it universally accessible and useful”. The keyword for me is “universally” which means everyone - not a particular group of people but everyone.

For me, I always say that we need to get real. We are all humans after all. We connect with each other at a human level. Stop treating diversity and inclusion as a list of checkboxes to tick off. It’s not as simple as that. Stop following trends and start thinking about how you can make a difference in people’s lives. It doesn’t have to be big! Every small impact creates a ripple effect and it will ultimately make a HUGE difference. For me, we are heading in the right direction although a lot more work needs to be done in this space. It is no longer enough to acknowledge that diversity and inclusion is important and not enough for us to just strategise. It’s time for us to go out there and make a real impact.

It’s quite simple really! If I can come to work each day and just be my authentic self and spend less effort on self-editing, I believe that is the starting point of an inclusive workplace.