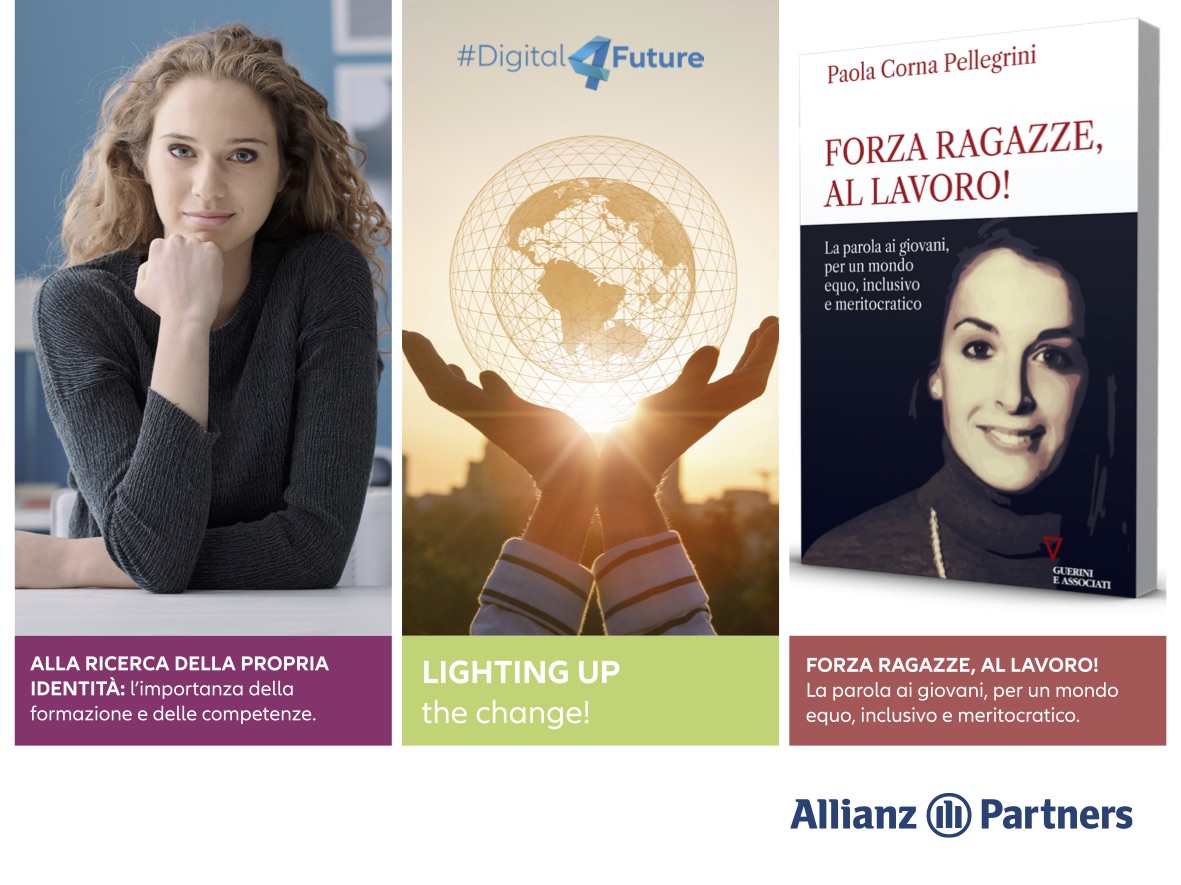 In sociological and anthropological terms, identity is defined as "an individual’s conception of themselves within the individual and in society, the set of characteristics that make the individual unique and unmistakable". In life, every human being has a specific goal: to find happiness. But the paths each individual can choose to take to achieve that are infinite. Zygmunt Bauman, the philosopher and sociologist of post-modernity, who coined the concept of a "liquid society" – a system that is constantly changing, in which it is increasingly easy to lose one’s identity – wondered about this.

At Allianz Partners, we decided to dedicate one of our internal events that took place on Women’s Day to talk about identity, and in particular its close connection with training and skills, which are essential for self-determination, charting one’s own course, strengthening Self-Empowerment and thus, in a way, to achieving happiness. Although we are aware of how much this "individual" search is not up to us alone, but is influenced by the social and cultural context we live in, we believe that training and skills help us to take responsibility for defining our own life project, to carry it out with awareness and coherence, trying to be a positive factor in the different contexts we relate in. So during our event we listened to some of our colleagues” experiences and were joined by a recipient of the Valeria Solesin Award. We met people who were all different in terms of ethnicity, educational background and gender identities and who, by telling us their stories, allowed us into their lives for a few minutes, to understand their different points of view and to learn about the paths they have followed in their "search for identity".

In order to better understand the links between identity, training, knowledge and skills, we then had the opportunity to broaden our analysis by talking about dignity, individual freedoms and human rights, thanks to the special participation of ActionAid. And now that our lives and work are increasingly linked to technology, that our identity is not only physical but also digital, developing skills and a culture in this area becomes a necessity.

So last year, with the support of Talent Garden, we launched an internal training programme on digital mindset and culture: Allianz Partners Lighting Up the Change. Digital4Future. We discovered how technology can change the way we relate to others, confront us with new challenges, but also become a means of sharing ideas, objectives and experiences, a fertile ground for conveying a message of change and involving everyone in this transformation. In order for each of us to be able to rediscover "our digital selves", to renew ourselves and to be an integral part of change and the future, we believe it is important to be the architects of our own personal development. But if the importance of digital culture today, and of this technical-scientific culture in general, is clear for all to see, there are some less obvious, but no less important, aspects that we often overlook. We often hear about how artificial intelligence, machine learning and big data are already changing the world, and will increasingly do so in the future.  However, it is not always clear to us that these technologies and the unequal spread of related skills can also have a bearing on phenomena such as the gender gap and the enhancement of female talent.

As can be seen from the recent UNESCO report “Artificial Intelligence and Gender Equality” or the World Economic Forum’s “Global Gender Gap Report 2021”, women are under-represented in the new digital professions, and this has a number of significant repercussions. Artificial intelligence is in fact “trained” by human beings, and if the vast majority of these roles are filled by men, the risk is that these machines will reproduce the same imbalances, the same biases – conscious or unconscious – that we face today. This is not just hypothetical, since there is no lack of concrete cases, such as those of recruitment software based on artificial intelligence, that have been found to discriminate against women. To manage this new challenge, using the potential of technology and digital technology to favour gender equality, knowledge and training, is once again the strongest weapon.

Too often girls, even in Italy, stay away from STEM (Science, Technology, Engineering and Mathematics) subjects. Recent research by Deloitte shows that in Italy only 1 out of 4 STEM students is a woman, and even fewer in faculties that are more in line with the emerging profiles required by the professional world. And yet, women enrolled in STEM faculties have performed better over the last decade in terms of both academic results and timeframe, with an average grade of 103.4 compared to 101.8 for men, and an average delay to graduation of 1.3 years compared to 1.5 for men. Once again, the problem is cultural, and the bias is, paradoxically, more pronounced among women. Also for this reason, since the 2019 edition we have opened the Valeria Solesin Award to undergraduates in STEM subjects, to underline the importance and the role that these studies and related professions can play in paving the path towards a fairer, more equitable and prosperous tomorrow for everyone, a theme that was relaunched in 2020 as well, thanks to the publication of the book FORZA RAGAZZE, AL LAVORO! La parola ai giovani, per un mondo equo, inclusivo e meritocratico, a book edited by Paola Corna Pellegrini, CEO of Allianz Partners, and published by Guerini e Associati, with the aim of being a tool for spreading this message to young people, who are the protagonists and spokespeople of change.

Once again, our message to the younger generations, but not only to them, is to not set limits, to open up to knowledge, to seek one’s own path with passion, putting aside fears and prejudices, because "we know what we are but not what we could be".