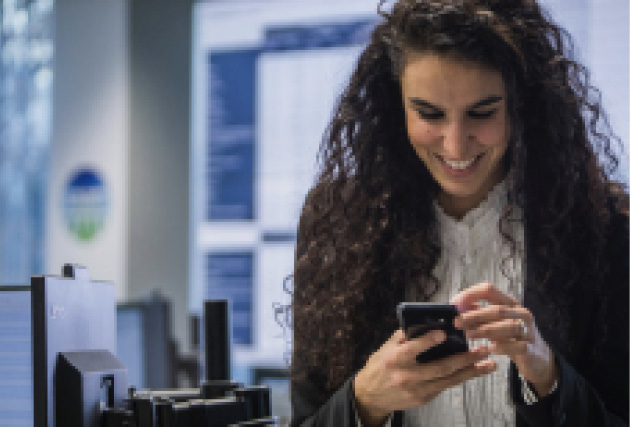 From school to the beginnings of working lives and beyond. Snam’s commitment to expanding and strengthening the role of women is based on a solid awareness that looks to the past, present and future.
From the need, born of the group’s past which, like the entire sector, has historically been characterised by a strong male presence, to increasingly reduce the gender gap, to the results in the present, with a growing female presence in Snam – professionals whose role is enhanced in positions of responsibility that are reﬂected in concrete actions and precise objectives.

From its achievements to the next steps towards a future defned clearly by the 2030
Agenda, which includes gender balance among the 17 sustainable development
goals, Snam frames the issue of gender as a commitment that starts with society, at
school, and arrives in the workplace.

This is the objective pursued by top management. In fact, the group’s articles of
association have been amended to include a gender balance criterion that reserves
at least 40% of the membership positions of the Board of Directors for the least
represented gender.

Snam also adheres to the Equal by 30 Campaign, a public commitment by public and private sector organisations to work towards equal pay, equal leadership and equal opportunities for women in the energy sector by 2030.
Snam’s acceleration plan on gender balance is based on a number of strategic elements:

Clear definition of group objectives
The presence of women in management positions, 21.75% of the total in 2021, is to increase progressively to 25% in 2023. In the succession plans for the first, second line and key positions, women, who make up 25% in 2021, will make up 27% in 2023.
In order to achieve these objectives, the proportion of women among new recruits has already been increased to 31%, rising to 42% in staff functions. The growth of the female component is also one of the elements that weigh in the variable part of top management remuneration: 10% of the long-term plan is in fact correlated to the growing proportion of women in leadership positions.

Women and STEM subjects
In order to reduce the gender gap in the sector, it is important that girls, too, focus on STEM subjects. Although girls perform as well as, if not better than, their peers in these subjects, the data is not encouraging: only 5% of 15-year-old girls plan to pursue a STEM degree and only 16% of STEM graduates are women.
A change in trend is needed. Aware of this need, Snam has chosen to fund scholarships for female engineering students, for example with the Milan and Bari Polytechnics.

Female empowerment
Fondazione Snam’s cultural promotion of inclusion is consistent with the group’s commitment to women’s empowerment, which also takes the form of various projects in secondary schools – meetings with role models, workshops – conducted in partnership with Valore D and the InspirinGirls programme.

Digital and inclusive school
In mid-April, Snam took over the presidency of the ELIS Consortium, which it will retain for 6 months, and proposed a new educational project for young people: an inclusive ‘school’ for the ecological and digital transition for high school boys and girls.
It is only by contributing to the education, freedom of expression and critical faculties of younger generations that we will be able to ensure a truly inclusive future for the planet, for companies of course, but also for society as a whole.