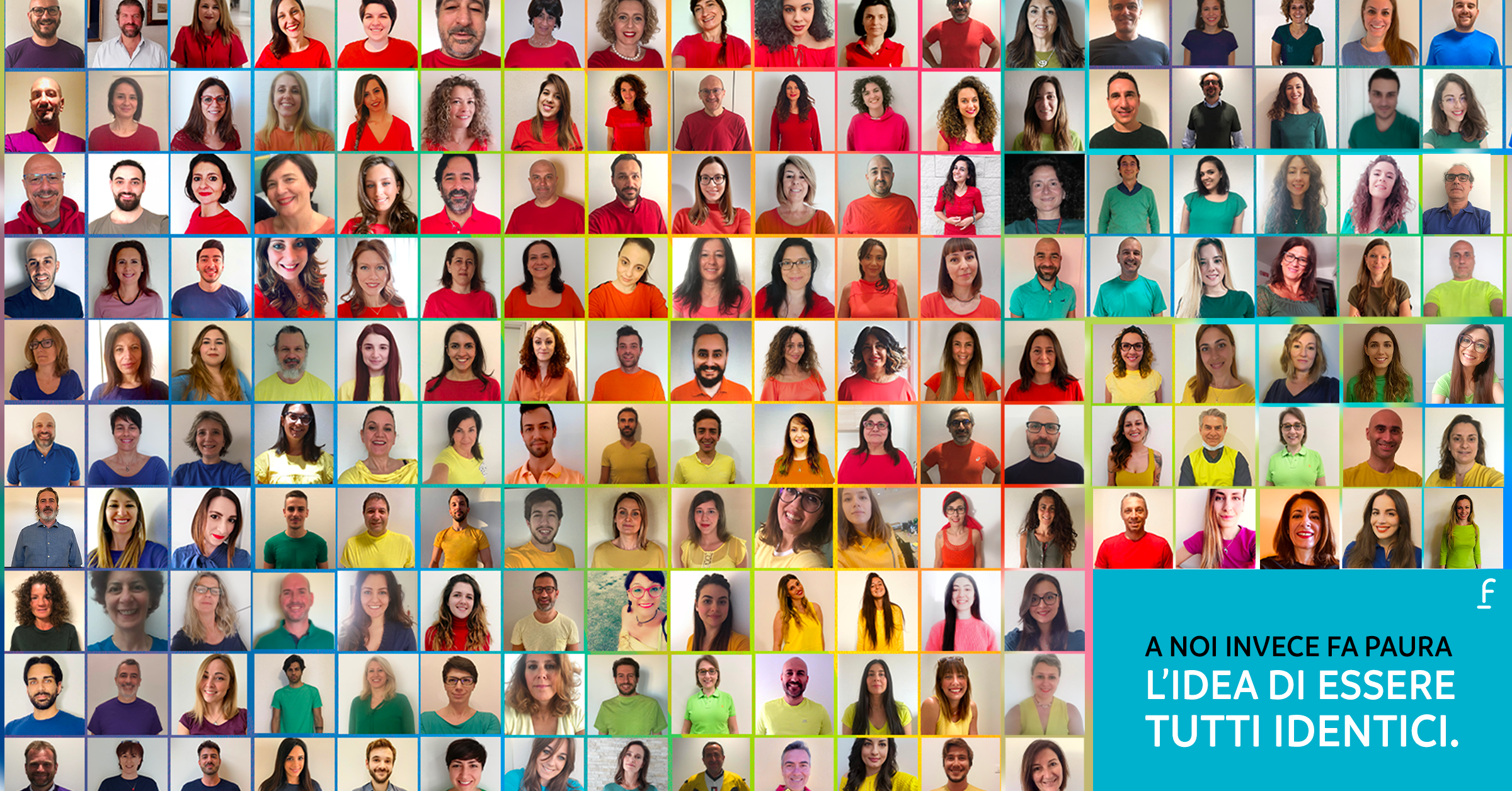 Free to be there

When I reflect on the fears we faced when we decided to introduce the issue of sexual orientation at Findomestic, I can only be satisfied with the progress we have achieved in just two years. We were afraid of not having the skills needed to tackle such a delicate and profound topic, of offending the sensibilities of our interlocutors, of the reactions of detractors. We decided to rely on professionals, on those who deal with issues of inclusion with seriousness and commitment, but above all with a lot of passion: a colleague and I went to Milan, to the San Babila office, and our friendship with Parks was born that day. During the first meeting with Simona and Igor I realised that we had made the right choice: the disarming simplicity with which they confront you with reality induces you to dig deep and face your limits and prejudices. Yes, we really made the right choice, and therefore decided to start with a first meeting to present Parks' activities to our Management Committee. I do not deny that there was a lot of fear again: who knew if all members of our board would understand why, in our opinion, the time was ripe to talk about sexual orientation in our company.

While Igor spoke, I observed the faces of those present: attentive, absorbed gazes, enraptured by his words, which continued to make a deep impression... prejudice, stereotype, inclusion, each person’s right to be themselves... It was an uphill struggle, we needed to proceed gradually, step by step. We presented Igor and Parks during the 2019 Diversity & Inclusion Week in Florence at the Spazio Alfieri, a cinema-theatre. This was the event that launched Diversity at Findomestic and which has become a highly symbolic place for us. Our Managing Director took the stage and explained to the audience why we had decided to involve Parks in our journey, and that we were aware of the difficulties that we would surely encounter, and that we would face with great passion and conviction. Our friends at Barilla, Baker Huges and Eli Lilly told us about their beautiful journeys, which were not easy, sometimes accompanied by some “slips”, but which were of great, great value for their collaborators and the community. We listened, enraptured and attentive: from their experiences we drew many lessons and food for thought. Once the round table was over, Igor took the stage and began his beautiful and profound monologue, titled "Hostile words". Flaunt, accept, tolerate... these are apparently innocuous words, which are part of our everyday life and vocabulary, but can be cutting if used thoughtlessly.

Heavy words, which can hide atavistic prejudices or, more simply, a lack of awareness and sensitivity. Our colleagues left the theatre deeply impressed by Igor's words, which reached minds and above all hearts, leading everyone to confront their deepest prejudices. We understood that the time was ripe: we began a series of meetings with Igor (unfortunately interrupted by the pandemic) on our platforms to introduce Parks to colleagues and to allow them to discuss with him and above all amongst themselves. Igor points out that, in reality, we had started down this very important path, perhaps unconsciously, years before when our company and our trade unions signed the Inclusive protocol, with which we recognised that unmarried couples, including same-sex couples, should have the same benefits and rights as married couples that are recognised by our collective labour agreement (CCNL) and by our CIA. Within the protocol, we have reserved a section dedicated to so-called "social parenting" with which fundamental rights are recognised even for those who are not parents by law, a very important goal that can still not be taken for granted today. We realise how extraordinary what we did "back then" is when we participate, thanks to Parks, in round tables and meetings dedicated to the topic. I was particularly struck by an event in which we were called to present our protocol, where I had the opportunity to listen to the life experiences of many same-sex couples, and of the immense difficulties they face due to unclear legislation on social parenting.

On May 17, International Day against Homophobia and Transphobia, we created a wonderful human rainbow made up of colleagues from all over Italy that was posted on LinkedIn to say no, forcefully, to every form of violence. There was an incredible level of participation by many colleagues that tells us how great the desire is to contribute to the creation of an open and inclusive work environment, in which everyone can truly be themselves without the fear of being discriminated against. Our journey continues with our virtual participation, for the first time, in Pride Italia, together with Parks, and with the resumption of meetings (online) with Igor, titled "Inclusion does not stop: embracing the future", "Building an effective network of Allies”,“ Inclusive leadership ”.

We therefore come to our 2020 Diversity & Inclusion Week: during the round table organised with Igor we witness the testimony of a young colleague happily married to a person of the same sex and of a colleague who is the mother of a teenager with a different sexual orientation: two beautiful and very touching experiences that show us that there is still a long way to go and that there are many barriers to break down, too many. Two stories that also show us that, by working together, we will be able to create an inclusive work environment in which everyone can show up as who they are; only in this way will we be able to tear down the walls that divide us and allow the diversities that distinguish each of us to enrich and compensate each other rather than divide us. Following this meeting and thanks to the generosity of the two colleagues who paved the way, we received many applications, thanks to which we introduced a working group that led to the establishment of our community, "Findomestic & Friends LGBT+A", which we will launch in a few weeks and the vision of which I share with you here:

We dream of a world free to express the colours of the rainbow, a world in which diversity is normal.

Listen without judging. Include, respect and promote free expression.

Free to be there.

From words to deeds.