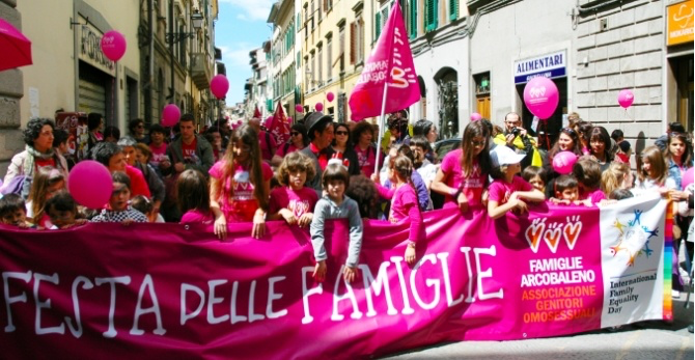 Families with same-sex parents: denied realities - The difficult path toward recognition in Italy

At the beginning of 2016 we had really hoped for it. For ten years we had been waiting for the recognition of a parenthood that began even before the positive pregnancy test, because it had been planned together as part of a shared family project. Finally, a bill was being discussed in parliament (the “Cirinnà” bill) which provided for “stepchild adoption”, that is, the possibility - pending the decision of the Juvenile Court - to extend parental responsibility towards a partner’s biological or adopted children, as already provided for spouses. In this way, as stated in a document signed by almost 600 jurists, “the rights of care, maintenance, heredity” could be guaranteed and “dramatic consequences in the event of separation or incapacity or death of the biological parent” avoided, thereby “safeguarding the continuity of parental responsibility in the exclusive interest of the child”. Stepchild adoption is certainly an insufficient measure because it only establishes the adoption of children who are in fact already children of the couple, but it would have made it possible to partially protect children born to same-sex couples thanks to assisted reproductive technology allowed in other countries.

There are about thirty states in the world that allow same-sex couples to adopt stepchildren and/or the adopt minors outside of the couple, but in Italy an obscurantist logic prevailed: the opposition to this aspect was strong and, to save the law, it was removed from the text. Thus, despite what has been expressed by UNICEF, the European Court of Human Rights and the Italian Association of Psychology, hundreds of families like ours have been kept in institutional limbo, hundreds of minors have been denied recognition of their ties with family members. For over 15 years, Famiglie Arcobaleno (Rainbow Families (FA)), the first Italian association of same-sex parents, has been fighting to protect children from the stigma that arises from ignorance and fear, obtain legal protection to cover them in their affections and in their assets, to contribute to overcoming a poor concept of parenthood that excludes and is based on a hierarchy of family typologies, which considers the family consisting of a man and a woman who are married with children to be at the apex of a pyramid that progressively becomes – as it moves away from the “ideal model” – increasingly problematic. Same-sex couples are placed at the most “socially pathological” point: in this case, it is the very recognition of a “family unit” that is denied.

FA was created in 2005, when a small group of people, homosexual couples from different areas of Italy, met to reflect on what to do to protect their children, who were about to start school and were therefore about to spend time in settings that were most likely unprepared to recognise them and their families. The urgency of flanking and helping them to face this phase of their lives serenely was combined with the awareness - acquired through direct knowledge of lived experiences and scientific studies conducted in countries where families with same-sex parents had already been an investigated and narrated reality for some time - that the well-being of these children derives primarily from their parents’ ability to assume the entire private, social and media responsibility of their family reality. This meant being totally visible and transparent, with the children and with people belonging to their extended social network (relatives, friends, teachers…). Only in this way, by fully owning one's choices and living them out in the sunlight, was (and is) it possible to convey serenity and security: visibility was (and is), therefore, a clear act of responsibility due to these children. Thus was born the association, which today has hundreds of members in every part of the country, the tip of a social iceberg that remains largely unknown because it has not been revealed, investigated, protected.

In addition to continuing its commitment to achieving the full recognition of same-sex families on a cultural and social level, FA is now also using the legal and institutional tools available today to obtain adoption in particular cases (that is, as has been possible since 1983 for the individual married person who intends to adopt their spouse’s children) and registration (the possibility of recoding both parents' names in the city registry): there are now numerous cases that have been resolved positively, in the name of the “superior interest of the minor” in having certainty and stability in their affections, even if this often happened after years of waiting and complicated procedures. Therefore, not only in Europe, but also within our country, we are witnessing a very diversified situation: cities where we are families in all respects, others where a parent is considered a stranger by law. We cannot continue to make our children suffer delays and ostracism in the political sphere; it must be remembered that a hostile context damages children first and foremost.

We will continue to fight in the Italian and European courts and in society, always hoping that the interests of minors will prevail over stereotypes and prejudices, until we achieve total equality for all families before the law. Our children’s problem is not their family, nor their daily life, but a lack of protection. Legal recognition of families with same-sex parents is essential to give full protection to minors; social recognition is essential to give them full dignity in all areas, starting from school.