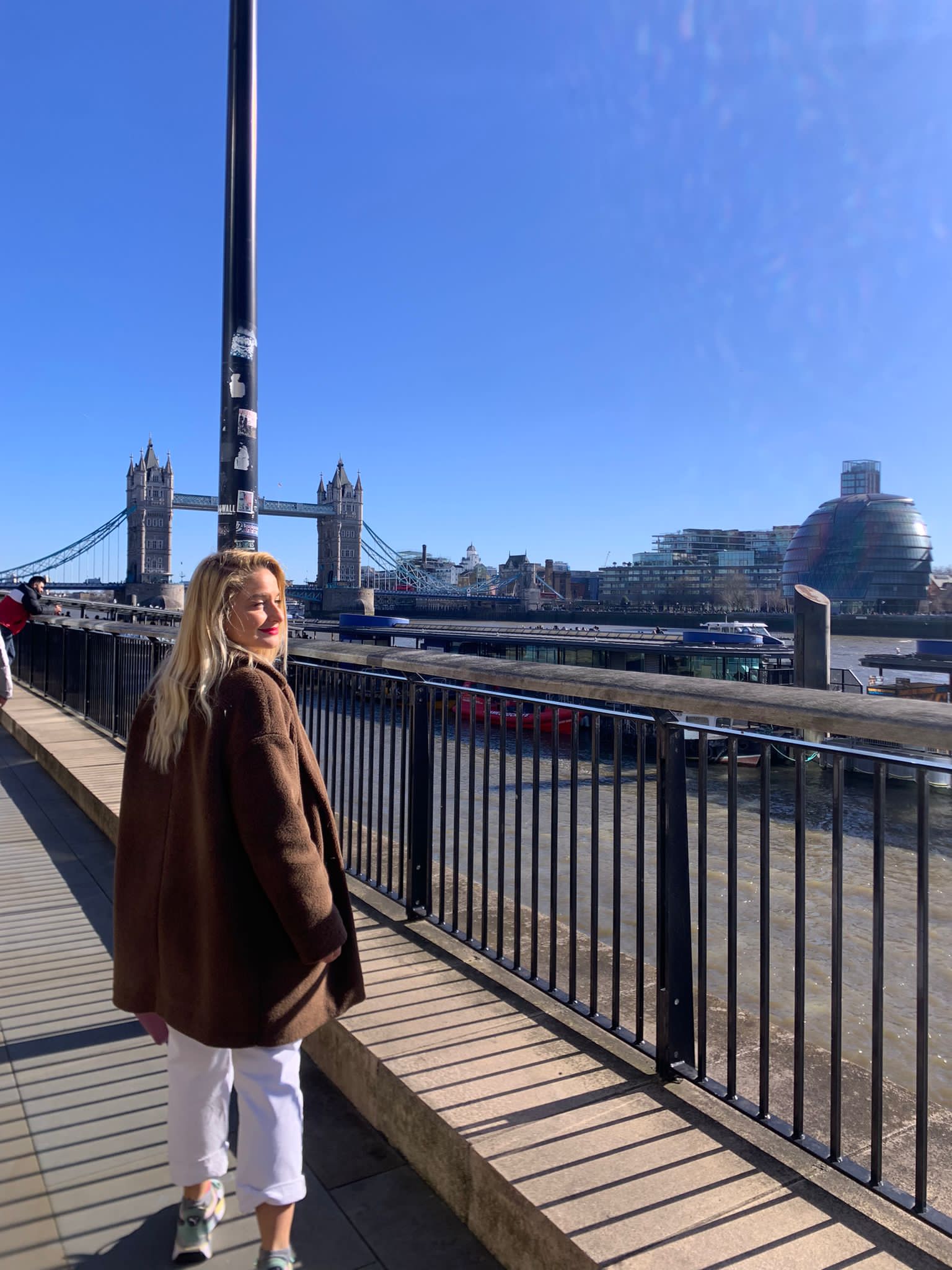 Cities according to a diversity manager (and traveller) 

‘You need diversity in your cultural background'. Cinzia Marzano, International Diversity, Equity and Inclusion manager at McDonald's, was probably born to do this job. Having always been fascinated by other cultures and traditions, she has been an enthusiastic traveller since she was fifteen. Her story begins in high school, when she was studying to become a pilot.

Dr Marzano, how did you become a diversity manager?
My path has not been linear. I studied for five years to be a pilot, but in the end, I realised it was not for me. After a Bachelor's degree in foreign languages and literature, I went to Vancouver for a study abroad experience because I had always been fascinated by cultures other than my own. Here I came across the subject of Corporate Social Responsibility for the first time. It was 2008, the concept of D&I did not yet have its own autonomous dimension but was included within CSR, which in North America was already highly developed. In Italy, on the other hand, corporate social responsibility was still receiving little attention. So I did my Master's degree in Languages and Cultures for International Cooperation at the Statale university, writing a thesis on CSR and Crisis Communication, in Cardiff.

During your university days, the concept of D&I did not yet exist, but the seeds of diversity had already been sown in your academic career. What was your first job after you completed your studies?
At that time, the profession of diversity manager did not exist. Not only that, but they also didn’t even hire CSR managers: it was an area of responsibility for HR or people within the company who did voluntary work in their spare time. After graduation I started to work at the Italian Chamber of Commerce in Santo Domingo, where I did communication work. The Dominican Republic was at the time a strongly male-dominated environment, where I discovered what the British call 'colourism'. Although it is a predominantly Black society, the lighter their skin tone, the more likely a person is to occupy a position of responsibility and success within society. This sentiment is so widespread and internalised that it is also reﬂected in the everyday life of Dominicans, who try to strip themselves as much as possible of any outward sign that reminds them of their origins. This experience gave rise to my passion, within the field of CSR, for diversity and inclusion issues.

The shift to diversity manager happened at IKEA, how did you come to this organisation?
Back in Italy, I started doing work experience at Bocconi university in the International Relations department. The leitmotif is always encountering other cultures: my task was to include foreign students, make them feel comfortable and help them to understand Italian culture, and at the same time to create valuable partnerships with other universities around the world. While working there I was contacted by IKEA regarding the position of mobility coordinator, which required a deep knowledge of cultural diversity to facilitate the adaptation of managers and families to everyday life in Italy and vice versa. In 2018, IKEA began a process of global transformation that led to the creation of new roles, such as that of diversity manager. I applied and it became my profession.

How do you learn a trade for which there is no manual?
You need diversity in your cultural background. That's why my experience as a pilot was important: it led me to develop more technical skills. You need curiosity, to constantly study, an analytical approach to things: all skills that you acquire from studying the humanities. Now we are also starting to see books, and I also recommend getting information through less traditional channels, such as social media, where excellent trainers often convey very useful content.

Did your many travel experiences help you prepare for this role?
Definitely. I have acquired a mindset that comes from having different experiences around the world. You can approach travelling in different ways. When I travel, I try to stay in the homes of local people, not in hotels. I speak a different language to understand the culture and get to know what is different. I have also travelled a lot on my own. And I have been doing it since I was fifteen.

Now you have been living in London for a few months, after moving there to work for McDonald's as a diversity manager. What was your first impression of the city?

The diversity you find in London and how it is valued is something that strikes you immediately. I say this knowing that I am a scholar of the subject and someone who has travelled a lot. For example, as soon as I landed at the airport, the nurse who swabbed me was a young woman wearing a veil, which is extremely unusual in Italy. Also, on the first weekend after I moved, on a walk along the Thames, I met a boy who had cross-dressed. Something we are still not used to in Italy.

Why do you think that is?

We are still too bound by how we are judged based on our appearance. If you are a young blonde woman wearing lipstick, you always need an extra 15 minutes when you are speaking in front of an audience to be considered authoritative. I have experienced this myself and seen it with other female professionals. I have witnessed development interviews in the past where people were advised to change their appearance, which was well-intentioned. In London this does not happen.

What forms does inclusion take in London?
Any service for people and citizens can be provided digitally, and this can be a truly inclusive form of support that can help individuals with any unique issues.

It is extremely common to see people of colour in leadership positions here. In Italy this does not happen yet, for historical and cultural reasons. When I worked in Italy and held workshops in companies, I was told that discrimination did not exist there, and would ask: name one Black person occupying a leadership position in this company. There was no one, whereas in London it is the norm.

Do you feel that your work can contribute to improving the city you live in, in terms of inclusiveness?
That’s a question I ask myself constantly. People often ask me: ‘Is your work just a trend or do you really feel you can make a difference?’ Currently there is a strong focus on these issues, so it could also be a fad, although I don't believe that it is a passing trend. Being potentially a fad is not necessarily something negative if it can make a difference in terms of people's well-being. Of course, there is also a brand reputation factor, that is undeniable. Companies live to sell, be it a service or a product. But that does not take away from the fact that you can have a real positive impact on cities and society. It will take years to achieve a mindset change but it is something we can do, especially big companies and brands, which have great power of language and representation.

Do you think that organisations are fully aware that they no longer have real boundaries and that everything they do internally, at the D&I level, can have a positive inﬂuence on the outside?
I don't think there is full awareness yet. Especially in Europe, when compared to the USA, where DEI (Diversity, Equity, Inclusion, ed.) comes from. The problem is that in European countries this model is often applied blindly, copied and pasted: the result is that diversity is not recognised. ‘We don't have this problem,’ I hear in interviews I do for work in EU countries. Diversity is seen as a problem, not as something that brings benefits, especially for the bottom line, and is seen as a less relevant sector, which has no reason to exist in Europe. There isn’t full awareness and, therefore, we have to do everything we can to be inspired by the American model but to adapt it carefully to the target context.

What characteristics must a city have to be truly inclusive?
At the ideological level, it must be able to listen to its citizens. Let me give you an example: a very dear friend of mine, who has been using a wheelchair for a long time, went to the municipal offices in Milan to apply for a passport. Unfortunately, that day she could not access the offices, which are located upstairs. This needs to be fixed. The staff offered to carry her: why would an independent woman of thirty-five accept such a thing? She then highlighted the situation, but will that have consequences? We need to create listening spaces where people who do what they need to do can express themselves and share their needs.

You are a passionate traveller. What is the most inclusive city you have ever visited?
Definitely London. I was also extremely impressed by the diversity in Vancouver. On the bus I would see women in burqas sitting next to girls in tops and shorts. At the time I did not have the tools to assess whether there was also equity and inclusion in that city. What I can say is that my travels and passions usually focus on countries that are not very inclusive and where equity is a distant dream, such as in Latin America and Africa. Among the less inclusive cities is Santo Domingo, a city that is structurally inaccessible: it is difficult to walk on the streets because of crime and accidents and open sewers on the sides of the roads. I have observed the same thing in many cities in Central America and Indonesia. As well as during my last trip to Ecuador, where universities and services we consider essential are very expensive and therefore inaccessible to most. If there is no accessibility, there can be no place for equity and inclusion.

What does Italy need to have more inclusive cities and organisations?
There is beginning to be diversity in our country because the course of events dictates it. What is lacking is equity. We need certainty of access to the same opportunities, to ensure that everyone has the tools they need to benefit from everything that cities and organisations have to offer.