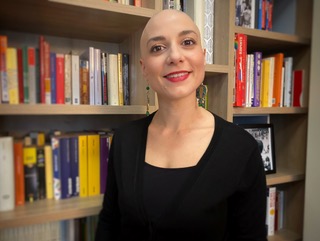 ALOPECIA: A real paradox - Surprising others by changing

Imagine finding yourself naked in the middle of a square full of people. You don't know how you got there and, above all, you don't know why you aren’t wearing any clothes. There you are, in broad daylight, not wearing a stitch. Some people are staring at you, some are giving you sidelong glances, some walk past without even seeing you, some stop for a moment, curious, and whisper something into a friend's ear. You feel uncomfortable, overexposed and vulnerable. "You're only naked", someone might say. "You’re not in danger.” Yes, that’s true, but you have to admit it's an unusual situation. This is how you feel when you have alopecia. You have the constant feeling of being the only one, in any context: the only one with a wig or the only one with a leopard-print head, the only one who is different.

Alopecia leads to hair loss, over months, years or, in the most severe cases, just a few days. It manifests in the appearance of small, hairless patches, which can increase in number and size until total hair loss, sometimes also body hair (including eyelashes and eyebrows). Alopecia is an autoimmune and genetic disease that can appear at any age, even at just a few months of age, most often emerging between the ages of 20 and 40. It is still little known, even though it affects 2% of the population, 145 million people worldwide. It is a disease that occurs irrespective of skin colour, sex, behaviour or dietary or hygiene habits. It can be considered a “second-class” disease because it isn’t life-threatening. It “only” puts you in a difficult position. It forces you into constant new beginnings: every morning when you look at yourself in the mirror and don't recognise yourself. It transforms you, and while you're juggling conflicting feelings, you also have to figure out how to tell others what's going on. You have to be careful with your timing and your words, because it is a visible and worrying transformation. Misunderstood, it scares and then, once explained, it is often downplayed, which can hurt.

The acrobatics are all about finding the perfect balance that allows you to understand others’ reactions, the awkward words that can come out of people's mouths and, at the same time, knowing how much weight and value to assign to something that is, for those who live it, a challenge. Alopecia is basically a paradox. If you show yourself to the world with a shaved head, you allow for direct and sometimes inappropriate questions. You are exposed. You cannot simply be yourself. People’s eyes look at you questioningly until you provide an explanation, and if you don't, it remains an unresolved issue that will have to be addressed sooner or later. If you decide to wear a wig, it doesn't show, at least most people don't notice. But you know you're hiding a secret. It is a constant inner battle. Alopecia forces you to think things through that you had never considered.

It is not a disability but it is disabling; you can do everything but it disables you because it monopolises you, it restricts your range of action, it undermines you at your foundations by affecting your self-esteem and your ability to relate to others, it feeds fears. Alopecia, because of its transformative and unpredictable nature, sucks up energy, a lot of it, especially until you find the key to understanding it, the right balance that allows you to regain control of your life. Again, differently. In my case, alopecia turned the tables and made me rearrange my priorities. I followed this new, chameleon-like me and decided it was important to normalise people’s gazes, starting with my own.

It was a long, tortuous path involving listening to what was happening inside. For years, even people who were very close to me did not know I suffered from alopecia until it became difficult to hide. I hide the disease under a wig, I tried to be my former self. I hid, covered, masked myself while feeling pulled in many directions: the professional, the woman, the daughter, the mother, the friend. At times, I passed up appointments and meetings because I didn't fit into this new skin: I was like a mascot before a football game, clumsy, overthinking and pretending. During the summer two years ago, I decided it was time to embrace my difference, in an overt way.

Alopecia carries with it an ancestral sense of sin. Perhaps the motivation lies in the age-old misconception that it is caused stress and that you therefore bring it upon yourself. It's a difficult prejudice to eradicate. So coming out into the open was my way of saying: there's no fault in this, it's “just” an aesthetic that you're not used to. But even more so, it was my way of reclaiming an identity that did not correspond to me. As a young woman it is even more challenging, in a world where aesthetic judgements are so dramatically strong. I don't hide the fact that I have no hair, I have made it visible and this has allowed me to lay down a heavy burden. I have regained the energy I used to spend hiding it.

Now, every morning when I wake up, I choose what clothes to wear and likewise decide whether I want to go out wearing a headscarf, nothing or one of my many wigs. People may find my way of dealing with it over the top, I think it's the only way for me. I'm freer than before, but I can't deny that I still feel overexposed. And I think I always will. Other people are surprised when they see me change like this, because it's not normal to them, but it's my normal. Alopecia is a unique journey for each person who experiences it: everyone deals with it in their own way. There are people who remain afflicted for a lifetime and are unable to show themselves even in familiar surroundings, and others who make it their signature look. There is no such thing as the right way, everyone charts their own path. And as Paulo Coelho says: “We can never judge the lives of others, because each person knows only their own pain and renunciation. It's one thing to feel that you are on the right path, but it's another to think that yours is the only path.”