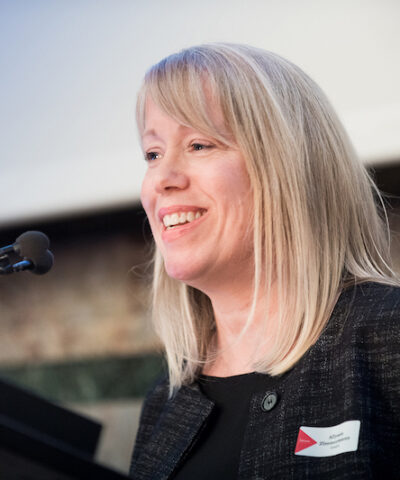 Catalyst is one of the first global non-profit organisations to focus on helping to build workplaces that work for women. Founded in 1962 by feminist, writer and advocate Felice Schwartz, its original mission was to highlight the “unused capacities of educated women who want to combine family and work”. Today, it helps the world’s most powerful CEOs and leading companies to accelerate progress for women at work. Partnering with over 800 Supporter organisations worldwide, it provides the necessary tools and solutions to make positive change in their organisations.

Catalyst’s work is rooted in rigorous global research, which provides it with an unrivalled insight into issues affecting women in the workplace. Its pioneering studies have debunked many myths about women and men in the workplace:

Addressing workplace issues at the intersection of gender, race, and ethnicity;

Catalyst dares to ask why women and women of colour are not equally represented at the top of the corporate ladder? It comes from the perspective that it is not women who need to be changed, but instead the barriers which are preventing women's advancement into senior roles which need to be removed by corporate leaders. Catalyst helps organisations diagnose these barriers and help build inclusive cultures. It provides effective programmes to organisations to reduce unconscious bias and ensure women advance at every stage in their careers, including building a diverse board. An inclusive work environment has many benefits and is a key competitive advantage for an organisation. Leaders who take deliberate, intentional action to accelerate diversity, inclusion, and gender equality are called inclusive leaders and should be rewarded by organisations. They can also champion flexible work policies, model best practices, and sponsor high-potential women in their organizations.

However, creating inclusive workplaces cannot be accomplished without engaging all employees. This means engaging men, who have long represented the leadership majority of almost all large businesses. Catalyst was among the first organisations to address the issue of working with men to achieve gender equity in the workplace and has become a recognised thought-leader in this area. Catalyst’s strategy and initiative around engaging men is called MARC (Men Advocating Real Change). Its MARC Leaders workshops engage participants in deep, honest dialogue and allow men to gain insight, empathy and personal motivation to take action to improve gender equity in the workplace. Organisations also need to positively impact women across intersections of diversity, including women of colour and other underrepresented groups. Working women of colour, for instance, face a unique set of challenges that intersect across race and ethnicity, gender and culture. Women of colour often have to deal with daunting roadblocks such as other people’s beliefs, attitudes, and experiences. They also experience an ‘Emotional Tax’, defined by Catalyst as the combination of feeling different from peers at work because of gender, race, and/or ethnicity and the associated effects on health, well-being, and ability to thrive at work.

Employers need to acknowledge intersectionality, across race and gender, and understand the issues faced by employees who reflect more than one dimension of diversity. It is essential that equity in the workplace is treated like any business objective with measurable objectives and targets. Over the years, Catalyst has launched specific initiatives to increase the number of women in leadership positions including the Catalyst CEO Champions For Change and its annual Catalyst Awards programme, which recognises organisations with ground-breaking initiatives that make change for women’s advancement. The future of the workplace needs leaders and teams from all genders, cultures, backgrounds and experiences to create inclusive workplaces where employees feel connected to and supportive of one another, and where everyone can advance and thrive. Having diverse teams equips businesses for the global marketplace, making them more competitive.  Progress for women is progress for everyone.

What were you like when you were younger? How were you educated? How did your parents' cultural diversity influence your growth?

I am a twin and the youngest of five. I was aware early on that I was different to the stereotype of what a 'girl' should be. I was more interested in 'boy' activities like climbing trees and fishing in the lake. I learned early on that I was different from what was expected of me as a 'girl'. It felt very limiting. My parents were very supportive though and always encouraged me.

I grew up in a small town of 2500 people in Minnesota. I knew at age 14 that I would be living in Europe one day and so I began studying German at 15 (it was one of the only languages offered). My biggest dream was to travel the world, and this seemed ridiculous and a silly goal for many while growing up where I did, but it was my dream. My BA was in German and Communications from the University of Minnesota. I moved to Germany at 22, and I've had the good fortune to live and work in Germany, Austria, Scotland and Switzerland.

I began working at the age of 13, when I wiped tables at my parents' fast-food restaurant, and I worked there all through high school and during summer breaks from University.

How have you seen Diversity and inclusion change in the last 5 years?

When I started working in D&I in 2007, it was not uncommon for us to be asked if we were feminists. We had to spend so much time explaining why it mattered that women were in the most upper tiers of the corporation, but now it's rare that we have to entertain that kind of conversation. What is the business case for having only men at the top? In the past 5 years, the dialogue has really evolved from the why it matters to how can we solve this challenge.

What does Diversity stand for, for you?

The world is diverse, it's a fact. But how are we engaging that diversity? How are we leveraging the diversity in our organizations, in our cities, in our countries? For me personally, diversity is a massive opportunity to create something new, something improved, something better, a way to reach a much broader group of people.

Working to advance women in the workplace has put me in a pivotal position to make positive change, which gives me enormous satisfaction every day. It's essential that we drive change to create inclusive workplaces, where all talent can thrive. I believe that a good leader is an inclusive leader, who leads with altruistic behaviours (such as humility, empathy and courage). This is key to building trust and engagement and has never been more important than at this time of crisis.

If diversity is a fact, inclusion is a choice. An inclusive workplace is one that consciously chooses to value, engage, leverage and embrace all forms of diversity. Our research reveals five hallmarks of inclusion. When employees experience inclusion at work, they report feeling valued, trusted, authentic, and psychologically safe (latitude) and psychologically safe (risk-taking). Psychologically safe in latitude means they are free to hold differing views and make mistakes without being penalized, and in risk-taking means they also feel secure enough to address tough issues or take risks. Organizations with strong "diversity climates" (i.e., inclusive work cultures characterized by appreciation of individual differences and the adoption of practices to advance underrepresented groups) are likely to increase employees' job satisfaction and commitment to the company. We know that diverse teams also have better decision making, stop group-think and are critical for innovation.