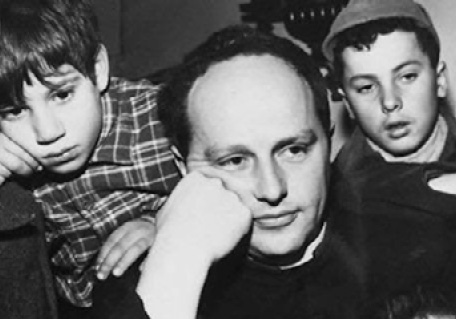 In 1962, we found ourselves following the negotiations between the DC and the PCI concerning Italian schools.
On December 31, an agreement was reached with Law n. 1859: the unified middle school was born, which would
allow anyone attending it to enter high school.
This Nuova Media may seem like an achievement, but in Vicchio, a small Tuscan town located in Mugello, there was a different school that was not satisfied with the crumbs and, with a book entitled Letter to a Teacher, aimed to unmask the Italian school system, which had eyes only for those lucky enough to be born into the right families.
The school was that of Barbiana, founded by Don Lorenzo Milani.
The book is written from the viewpoint of someone who, until then, had not had the opportunity to speak, having come out of a state school almost illiterate, and having managed to learn, wanted to become a teacher.
The ascent to a teaching position, however, was not so easy because the risk, for a child of peasants, of remaining stuck in the same class for a long time, was real. According to statistics, during the 1963-64 school year, 1,031,000 students failed out of compulsory school, including Gianni and my father.

My father had the good fortune of having far-sighted parents and he finished the eighth grade before starting to work; Gianni, on the other hand, one of the boys at the Barbiana school, stopped studying at the age of 14 after failing his private exam and found a job.
As a teacher who doesn’t have a permanent teaching position, this open letter written by the students to the teaching staff has been essential for my education.
Sixty years have passed, but some situations that didn’t work out well then still play out before my eyes. Is it not true that many students are careerists? The only purpose for studying is the grade one is given, as if the only representation of oneself were a number obtained for a performance. I have made the speech in class many times: ‘You are not a number, you are people,’ but I see it – when I hand back the tests – that the interest is in the mark and not in learning from one’s mistakes.
At the end of the year they ask me if 5.5 is a passing or failing grade, as if only the average counts and not the course. Who puts these ideas into the heads of boys and girls?

Another critical point is the connection between school and life.
The boys of Barbiana complained about not going further than the First World War when they studied history; we go a few decades further but without considering all that has happened in recent years. The programmes have been replaced by National Indications and yet, for some teachers, they are an obsession.
Today more than ever, greater importance should be given to current events, to reading newspapers, to the opinions of the students: ‘The mind is not a vessel that needs filling, but wood that needs igniting.’
Finally, there are the boys and girls that no one wants. Back then they went to work or landed in Barbiana; today they go to private schools (if they were born into the right family) or continue to be rejected until the time to drop out arrives. Art.
3 of the Constitution says that we must ‘remove obstacles of an economic and social nature.’
Sometimes students continue to repeat the year because they don’t know Italian, they don’t know how to ask for help; sometimes because they don’t study, but before I say why they have failed, I always ask myself: ‘What have I done to help that boy/girl?’ or ‘Am I sure that their behaviour doesn’t mask something?’ Because as the children of Barbiana wrote: school cannot be a hospital that cures the healthy and rejects the sick. It’s easy to teach someone who always gets good marks. For me, the greatest satisfaction is seeing those with a failing grade get a passing one.
I have been working at school for 3 years, my colleagues say that I feel this way because I am young and that I will lose my enthusiasm as the years go by: when that day comes I will change jobs. Unfortunately, the Italian educational system also has those who consider teaching a fallback, and I don’t blame them: there is the salary, an eighteen-hour week (if you don’t consider all the time spent on preparation and correction) and even the possibility of getting work as a substitute without having to do an interview.
In Barbiana, they say that if they force teachers to work more hours with an after-school programme for students who need it, many will disappear. I believe that too.
What pushes me to go to school every day is my passion for my work, even if, like the narrator of the book, I come
up against a recruitment system that makes me turn up my nose: he had a teacher who flunked him out of high school; I’m waiting for a testing session that will allow me to access a permanent position; we both find ourselves sacrificing the in-depth studies we need to teach because we have to study concise little books.
‘I study like a worm’ to be evaluated by a crossword test, when for me school is so much more, I get ahead by training with paid courses or putting myself on reserve lists. ‘I will be a teacher and do school better than you,’ says the narrator. His cockiness gives me the strength to keep pursuing my goal.