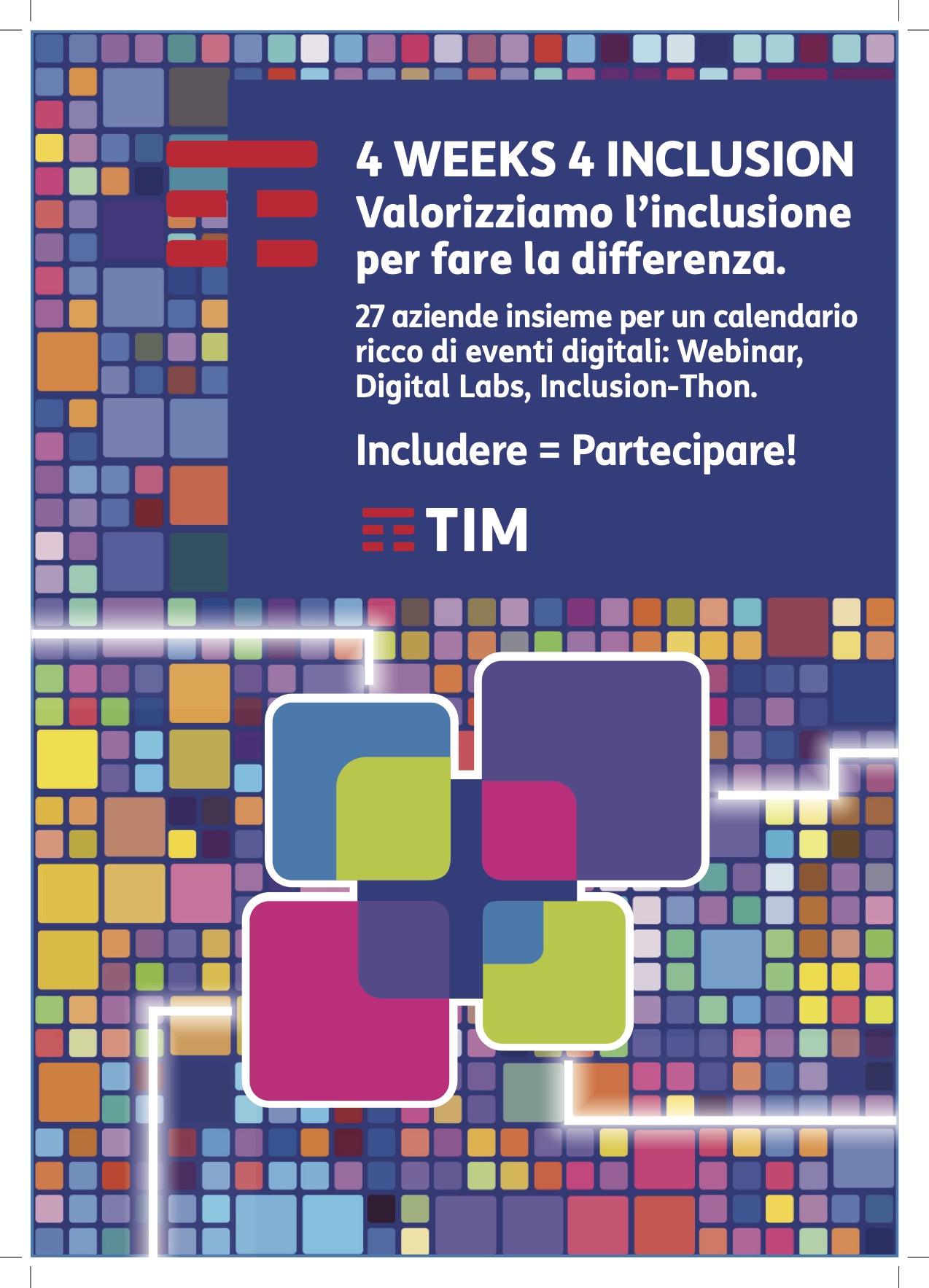 #4WEEKS 4INCLUSION - The cultural revolution that passes through companies

Once upon a time there was an Inclusion Week, one week a year dedicated to inclusion and enhancing diversity, organised for TIM by its employees, or rather, by its citizens. This was a mode of participation that came from below and created opportunities for citizens to come together and address issues related to inclusion. Resources, in the true sense of the word, with a vocation: sharing for the benefit of all colleagues. In other words, the idea was to discover what everyone's needs were by making individuals the protagonists in corporate life, without interpreting their needs from above.

"What if Inclusion Week became an Italian event, involving all companies?" This was the challenge that Andrea Laudadio, head of the Tim Academy & Development in the Human Resources sector, launched. "What impact would it have on Diversity & Inclusion policies at the country level if many companies joined forces to make it a national event?"

And so the machine began to work and Inclusion Week grew to become 4Weeks4Inclusion. A race against time, a virtuous commitment that led to an extraordinary result: twenty-five companies united for the first time in the name of inclusion. Those who marked the beginning of the first edition of this cultural revolution included, in alphabetical order: Accenture, Agos, Banca Ifis, BIP, BNL BNP Paribas, Danone, Donne leader in sanità, Flash Fiber, Ferrovie dello Stato Italiane, Google, HERA Group, HR Services *, INWIT, Olivetti, Parks - Liberi e uguali, Poste Italiane, Schneider Electric, SNAM, Sparkle, Telecontact Center, Telsy, TIM, TIM Brasil, TIM Retail, Valore D. Thanks to this collaboration, for the first time a shared calendar of events was organised that touched upon many aspects of inclusion and enhancing diversity: from the gender gap to disability, from age to sexual orientation, from ethnicity to religion. Over four weeks, between 13 November and 11 December 2020, over ten thousand people registered, over one hundred and sixty guests were hosted, and there was a calendar of about seventy digital events: webinars, often with Italian sign language and simultaneous interpreting between Italy and Brazil, digital labs and an Inclusion-thon. It was a huge inter-company event where, for example, a Google employee was able to attend a Sparkle event during working hours.

The 4W4I was launched by the then-Minister for Equal Opportunities and the Family, Elena Bonetti, with the president of TIM, Salvatore Rossi. The meeting was based on the importance of discussing issues related to Diversity & Inclusion policies and what can still be done within companies to improve. "We need to start from uniqueness to build a productive social network," as Elena Bonetti put it, before continuing: "Today we can choose a model that knows how to welcome humanity. Not because it's just right, but because it's worth it. Because only a company that wears its uniqueness proudly knows how to put everyone in a position to put their potential at the service of a collective process." There is a profound and positive relationship between inclusion and corporate performance, and companies that make their workplaces inclusive are known to perform better. At TIM we have also found, through tools such as the Engagement Survey and experimental research carried out with La Sapienza University, that the people who feel most included and those who have the greatest ability to include others perform best. And since we are companies that produce or offer goods and services, it is also necessary to look outside the company and act as observers of the market: who are the users? What do they want? What do they need? How can you invent something or anticipate a need without considering diversity? The users, the public, the customers are a community made up of people who are all "different" in terms of gender, sex, ethnicity, religion, age, physical, mental characteristics, etc., and as such it would be unthinkable to imagine a workforce that does not reflect them. Diversity and inclusion are not "other" or "external" elements that forcibly intersect in people's individual experiences but are already part of them, and companies can only enhance Human Capital as an invaluable asset. Nature gives us the best example of the coexistence of biodiversity: a cypress is elegant and majestic in its uniqueness and you don't think about how tall it is, you just admire it. Equally fascinating are the almond or olive tree, each with its own fruits, each in its own time. Expecting approval is something that is not spontaneous and which, in fact, does not exist in nature, either for plants or for people. Enhancing diversity is a winning strategy. Speaking of "diversity" does not mean facing an abstract concept but a concrete reality that has always been part of our world. A reality that for most of the time is experienced in the company, in person or digitally.

4W4I ended with a round table composed of the Human Resources managers of many of the companies involved: a discussion with relevant professionals from the Italian scene in which we tried to answer questions such as, for example, how companies can be an engine for developing a culture of inclusion in society. Thinking differently, casting aside outdated strategies, looking beyond. The power of a company lies in its vision, in seeking new solutions, different from those adopted up to a given moment; in the ability to deconstruct oneself to restart without ever settling on a consolidated strategy but always trying to improve. Because scenarios change, the world and its people evolve. And what was acceptable yesterday will not be acceptable tomorrow. Only when there is no longer a need to talk about D&I policies will we be able to look at the steps taken and have the audacity to say that we have done well.