A diverse workforce has always been a competitive advantage for Baker Hughes, a global energy technology company which operates in more than 120 countries and employs 57,000 people worldwide, 5,000 of whom are based in Italy.
Baker Hughes believes strongly that the ability to leverage different ideas and perspectives generates innovation and strength. That is why the company celebrates the diversity and uniqueness of each employee and believes that everyone has the right to be treated with fairness, dignity, and respect.
In the energy industry, Baker Hughes stands out for its commitment to promoting diversity among its workforce, paying particular attention to the LGBT+ community.

Focusing on Italy, Baker Hughes’ journey on diversity and inclusion started in 2015 with the establishment of the first Italian Hub dedicated to the inclusion of LGBT+ individuals, which at that time involved around 50 employe- es between members and allies.
Since then, the company has done a lot of work, fielding activities and initiatives designed to sensitize and define a positive path for Baker Hughes’ workforce, its partners, and local communities. Today, more than 500 employees from across Baker Hughes Italy have joined the Hub, named Pride@Work, making it one of the most-followed Baker Hughes Employee Resource Groups (ERGs) worldwide, right after the US Pride@Work team. In 2018, the team was named by Parks Liberi e Uguali the best ERG among Italian companies, a very important recognition of the company’s commitment.
Pride@Work is fundamental to Baker Hughes’ people and organizational culture. As a matter of fact, the ERG is a precious instrument spreading a powerful and positive influence by helping to build awareness, drive change, and establish a solid community network. It gives a strong voice to groups who might otherwise be unheard and helps elevate conversations and awareness around key LGBT+ issues. However, none of this would be possible without the real driving force behind the Pride@Work network: its people, better known as the “allies”, or in other words, employees of all genders and sexual orientations who strongly believe that LGBT+ people must have equal rights and respect both inside and outside the workplace. No doubt 2020 was a challenging year globally due to the effects of the pandemic. However, this did not stop the Pride@Work team which continued to be committed to organizing digital and online initiatives over the past months, helping to build a connection between people at a time when they particularly needed it.

The biggest event organized last year by Pride@Work was Virtual Pride, which took place in June. Because the pandemic made it impossible to take part in the usual physical events and parades, this was the first digital Pride event organized by Baker Hughes. It involved more than 7 Hubs from the company’s operations around the world, including Italy, the US, Australia, India, the UK, and Argentina. The event, hosted by the Italian team, was indeed an “online parade”, a virtual world tour of Baker Hughes’ hubs in which participants were able not only to share their achievements, milestones, and stories of progress, but also talk about the status of LGBT rights in different parts of the world. It was during this event that the Italian Hub announced the kick-off of the “Transgender toolkit”, the first document in Italy integrating guidelines and best practices to assist employees who are undergoing gender transition.
This revolutionary document, one of the first of its kind realized by a company, makes Baker Hughes a proud pioneer. It is already being used by the company’s employees from all over the world as a reference during an important and delicate personal change.

In December, Baker Hughes was also the first company in Italy to organize a World AIDS Day, a seminar completely dedicated to sexually transmitted diseases, hosted in collaboration with other company ERGs and dedicated to health and wellness, disability, and parenting issues.The seminar promoted scientific discourse on the topic while offering a forum for debate about the importance of prevention as well as social issues related to the disease.
World AIDS Day was also attended by representatives from companies in other industries, such as Findomestic, Lilly, Pfizer, and Gucci, allowing participants to share their personal experiences and stories, and thereby helping spread awareness on this sensitive topic.

In line with the LGBT+ focus within the company, Baker Hughes organized “Wear a Color Days” in which its employees were invited to wear clothes and symbols in specific colors and post pictures on social networks to celebrate and generate widespread awareness of key dates for the LGBT+ world, such as Transgender Visibility Day in March, Lesbian Visibility Day in April, IDAHOT Day (International Day Against Homophobia Transphobia) in May, and Coming Out Day in October.

Another successful activity Baker Hughes carried out in order to tackle an unfortunate social issue was a series of anti-bullying seminars, open to the company’s employees and partners. Many guests from other companies and associations joined the seminars, which were organized in collaboration with Amnesty International, AGEDO association, and the LGBT Resource Centre of Turin, bringing different approaches and insights for avoiding discrimination and bullying in workplaces and in society as well, with a whole section dedicated to Cyberbullying, focusing on social network

What helps Baker Hughes maintain its competitive edge in the energy industry is its people.That is why it’s necessary to keep building a culture in which people are able to bring their true selves to work, while feeling valued, appreciated, and heard. The Pride@Work team is working to bring awareness and commitment at all company levels to achieve a culture of equity and belonging. Baker Hughes strives to be a leading employer for its industry across the LGBT+community, ensuring everyone is visible, engaged, empowered, at ease with being their authentic self and part of an inclusive environment. The Baker Hughes ERG teams in Italy and abroad are a vital element to ensuring that the company continues to work to create a safe and inclusive environment, inside and outside the company. 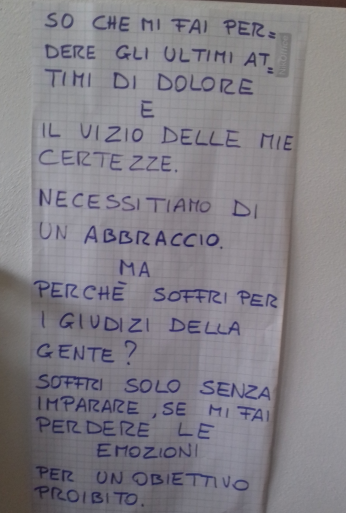