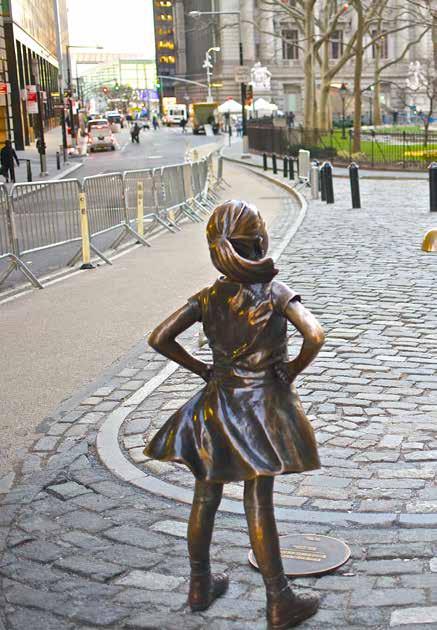 The success of a global and articulate reality

State Street Corporation is a US company dealing with financial and banking services. Established in 1792, it is actually based in Boston and it is listed on the NYSE. With 40,000 employees distributed among 29 countries and a wide variety of services, State Street represents, worldwide, one of the biggest financial services companies. The two Italian branches are based in Milan and Turin. We are meeting with Riccardo Lamanna and Denis Dollaku to discuss I&D with them; this is an issue that, in due course, has singled out State Street Italy as one of the companies capable of devising far-ranging proposals and initiatives on the theme. Riccardo Lamanna, who has been the Italian business head from May 2010 to June 2019, currently occupies the role of Head of Global Exchange for EMEA. He is a great expert of the global and Italian financial state of the art, and has been the main referring man at State Street Italy also for the support and development of Inclusion&Diversity activities inside the company and for the public relations. Denis Dollaku is a State Street veteran. He landed at the Corporate Audit area in the bank’s Boston headquarter in 2000, from where he then proceeded to move on: London, Frankfurt, Munich, and finally Milan since 2011. Starting July 2019, he took on the role of Branch Head at the Italian office, soon becoming the reference man for all the local Inclusion&Diversity initiatives. Denis is a strong supporter of the I&D issue and during the years spent side by side with Riccardo has been able to stir up an inclusive mood and behavior that he succeeded to pass on to the Italian staff.

Good morning Riccardo. We would like to start with a question for you: what is the meaning and the importance you give to I&D for a company that is both global and also rooted in its Italian work frame?

We believe that an inclusive culture for diversities, be what they are, will make us stronger, contributing to establish our success. In the current complex and ever evolving world, our goal is to make sure all our employees have the certainty that their identity and uniqueness are represented, included and protected by the company. This is our way to pave the way for the expression of a single talent, and therefore to the ensuing success of State Street.

Riccardo, what do you mean when you say Diversity? Can that possibly be a vague concept?

It certainly is a wide ranging concept: in the State Street world we start from small differences typifying each person – what you eat, how you dress, if you like to read, if you love sports – to proceed with a thorough classification and appreciation of the main and most typifying groups of differences. To represent and enhance diversity, first and foremost, means to promote, develop and also attract new talent in our enterprise. The bottom line is: «be true to yourself to be true with others at the company’s service, while promoting its success».

Riccardo told us about macro-diversity. Let’s ask Denis the true meaning, for an internationalized reality like yours, of talking about such issue?

State Street is a global reality. In certain territories, some of these groups are more heartfelt than others, and this stems from an objective necessity. We do know each local reality is lined by its own cultural, religious, and ethnic roots: identity and a specific system of values define what is more heartfelt or, maybe, what is more problematic. What we do is to devote our work at promoting all the differences – gender, sexual orientation, generation, culture, religion, social status, disability. We always place a special attention on some of these specificities and on the points it needs to emphasize: in Italy, gender gap is a pivotal issue together with LGBT and we do pay attention to cultural gaps as well, because our reality is strongly propelled internationally.

If I get it right, this belief is almost the mission – the fundamental direction – of the company’s arrangement.

You have to keep in mind that our arrangement lays on four irremissible pillars, our basic values: Community, Culture, Commerce, Career. Every single, internal or public, event and every individual course is inspired and traces back to these inevitable values. It goes without saying that, if a strong belief in this value is there, a company wants to be inclusive. Inclusion and the promotion of diversity are the foundations to create our own sense of community, but also to help define the imprint we want to give to the relations with our commercial partners: and this directly translates in actual market value.

To us, I&D is Community – we pay attention to the community and the territory in which we operate; Culture – our efforts concentrate on the creation and the protection of an inclusive environment; Commerce – our activities are also referring and connecting to our business goals and strategies; Careers – the activities we put into effect are also aimed at giving our employees tangible chances of advancement inside the company.

Riccardo, can you make an example of how all the above actually translates into reality?

In the last few years this has fulfilled into very tangible acts. First of all, we devoted our thorough attention to fill the career gap between women and men. You well know how this is a cultural and structural gap, worldwide: and Italy is no exception to the rule. We are trying to change this system from the inside – we do not talk about pink shares, but we do set ourselves specific goals to raise the numbers of women in the apical positions; we try to attain this goal through an effective action and a strategic direction in the mid-long term period. So we are targeting our attention on the talents and their growth and the outcomes measured so far are quite significant. Here’s another example; in our supplementary company agreement, we introduced marriage leave and insurance cover for LGBT partners among our colleagues who are getting married, also in civil wedding in the countries where it is allowed. And we have done this back in 2014, before civil unions were lawful in our country. But you do not only get these macro interventions: we also have an I&D volunteer group devoted to identify and organize events and initiatives.

What kind of events?

These are events created by the employees for other employees with the company’s support, and sometimes they are also aimed at our commercial partners; one of the most important was held in October 2018 and it will be hosted again this year. We devoted a full week to I&D – our Diversity Week: we brought in theatrical plays such as Tindaro Granata’s Geppetto e Geppetto (Ed note: winner of Premio Ubu 2016); the dance and the words of Simona Atzori, the disabled artist dancer who lost her arms and who is very popular; we hosted the parents union for children with cancer, as well as the winners of paralympic medals such as Federica Maspero – silver medal in the 400 metres athletics at the 2017 London Paralympics; we have invited well-known speakers such as Odile Robotti, expert on the issues about the enhancement of female talents and also held training sessions on the five senses to develop the sense and the richness of diversity.

I am asking you both: are you trying to tell me you really believe in it?

We want and we must be realistic – Denis goes first – and though we firmly believe in it, we are also aware that placing our attention on issues so delicate, we are quite exposed with public opinion. I am referring to the Fearless Girl that we exhibited on March 7, 2017, facing the bull of Wall Street. This statue was commissioned by State Street to symbolize the dignity and pride of a little girl fearlessly facing a strong and powerful animal, the bull. The Fearless Girl message is addressed to companies, to encourage them to include more women in their boards of directors.

It was an open act of awakening for the job’s world, to push it towards closing in the gender gap in the business. State Street gives its best, in the awareness of the inherent difficulties in the actions undertaken, through a steadfast search for dialogue, reconciliation of different positions, respect and promotion of sensibilities and diversities of each individual and every group. We also do it through a constant education of our people. To give you an example, we regularly propose a training on how to understand and, consequently, handle the so called unconscious bias. We do this because each sensibility is different and not always – not in every person – we will find the same degree of permeability and openness. Of course – Riccardo adds – it would be a dangerous delusion did we think all our employees are embracing this: it is not what we aspire to; we can not change people’s mindsets, but we can ask for respect and mutual regard, a cooperation devoid of every prejudice and preconception. This is why we are using very tangible initiatives, like the ones mentioned before. Training and I&D events, to us, aspire to set an example and create a culture. It is our style: no impositions. I would also like to take up the theme Denis touched upon before: the awareness addressed to the companies to introduce more women in the boards of directors. In this respect, State Street has a clear and explicit goal for the next 3 and 5 years – raise the number of women in the various senior hierarchical levels, from AVP (Assistant Vice President) to SVP (Senior Vice President). It is definitely important to monitor it, while attaining the action towards the goal.

After all you are not perfect, right?

Let us make an example of a more business oriented issue: State Street is strongly committed to develop a sustainable finance, that is the ESG (Environmental, Social, Governance) sector on which we are essentially focused and where we are among global leaders. Even in this we are very resolute to create an offer determining the optimization of the outcomes, to meet those clients who are not contented by a profit only idea half-way. In this segment, that is still defining its outline, a constant improvement, not perfection, is not only possible but also required. We believe that an awareness of the constant perfectibility of each intent and action is the secret to true talent – even the company’s. Going back to I&D, someone will always say that we did too much and someone that we have not done enough. But even criticism is essential to spur and innovate, even amaze, at times.

We are always engaged – says Denis –  to get the most, especially when we are talking I&D: we are aware we did not reach perfection and that we can not make everyone happy all the time. But this is the key to go forward and get better – being stimulated to do better and better. We do not want to sit back. In our 2018 Corporate Responsibility Report we announced what we accomplished, how many outcomes we were able to get in the I&D and other fields. These were definitely encouraging outputs and they placed us very well in the context of the industry we operate. We are certainly not contented and we want to go forward, by working on challenging and obviously attainable goals.

RICCARDO LAMANNA, head of the Global Exchange division for the EMEA region.